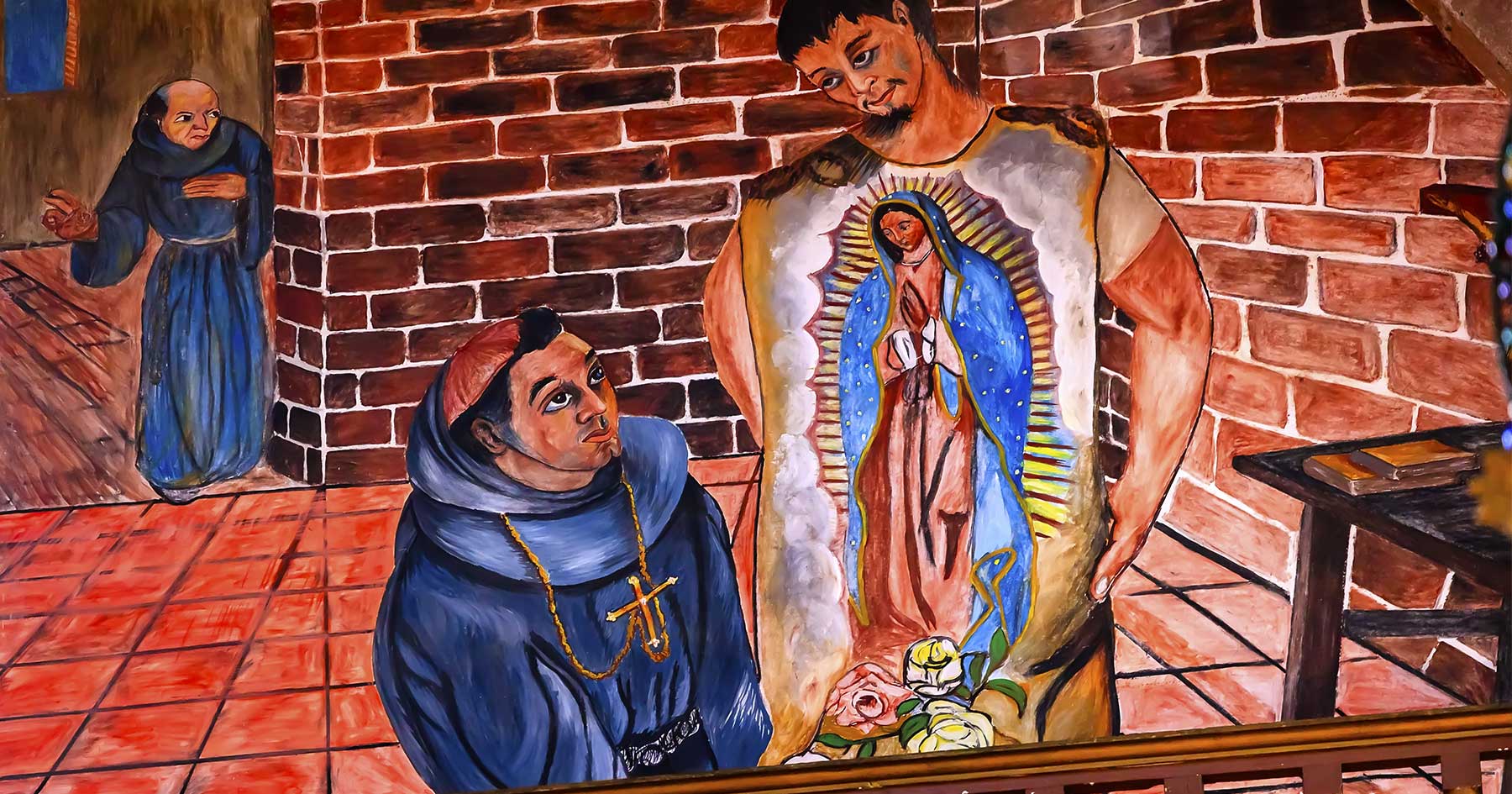 In 1531, three years before the Church of England was born, the seeds of an Indigenous church were planted.

Many Canadians may not be familiar with the story of St. Juan Diego, who encountered a Marian apparition on the Hill of Tepeyac, which later became part of the village of Guadalupe, outside Mexico City. Growing up in Florida, though, I frequently encountered icons, candles and churches dedicated to Our Lady of Guadalupe, and so I feel a certain attachment to her. Juan Diego is said to have encountered the Virgin Mary four times, with another appearance to a family member. She spoke to him not in Spanish (or Latin) but in Nahuatl, a language of the Aztecs—for Juan Diego was, himself, Indigenous. She asked for a church to be built on that site. On her final appearance to Juan Diego, she arranged roses in his cloak; when he opened his cloak before the archbishop, later, the flowers fell away and revealed an image of the Madonna.

Church leaders immediately doubted Juan Diego’s claims. Evidence is sparse, and as far back as the 16th century, Roman Catholic clerics wondered if Indigenous beliefs in the Virgin of Guadalupe missed the doctrinal mark. Over the centuries, scholars have wondered whether he made the whole thing up. Some have wondered if Juan Diego existed. The Catholic Church’s decision to beatify and canonize Juan Diego (in 1990 and 2002, respectively) saw public opposition. There is much more to read on this.

I, for one, believe that Juan Diego encountered the mother of God. I am neither an historian nor a theologian, but something about the story meshes well with my read of the Magnificat, the song Mary sings after her visitation by the angel Gabriel (Luke 1):

“My soul magnifies the Lord, and my spirit rejoices in God my Saviour,
for he has looked with favour on the lowliness of his servant.
Surely, from now on all generations will call me blessed; for the Mighty One has done great things for me, and holy is his name.
His mercy is for those who fear him from generation to generation.
He has shown strength with his arm; he has scattered the proud in the thoughts of their hearts.
He has brought down the powerful from their thrones, and lifted up the lowly; he has filled the hungry with good things, and sent the rich away empty.
He has helped his servant Israel, in remembrance of his mercy, according to the promise he made to our ancestors, to Abraham and to his descendants forever.”

It’s in the Magnificat that we see Mary speak directly to differences—not the differences we are born with or that make us rich in diversity, but the differences we impose upon one another. The proud, the powerful and the rich be advised: God favours the lowly, the hungry and the conquered. The unwed mother and the elderly. It’s not much of a stretch to imagine this holy lady visiting a people who are all of these things—in fact, the history of Marian visitations worldwide is tied to the poor, the oppressed, the othered and the conquered. God doesn’t just ask us to treat one another fairly; God, the God-bearer and the angels physically show up among the suffering, the poor and the outcast.

This issue of Epiphanies explores the differences we find between us—and like Mary or St. Paul in his letter to the Galatians, we consider here the differences human beings define, the lines we draw and categories we form that separate us from one another and from God. We consider the people with whom God is deeply present and perhaps speaking—people marginalized by society, but not by God. I wonder what they might share with us in the pages ahead.

It is easy to be proud of (and, at times, frustrated with) the progress the Anglican Church of Canada has made in setting aside differences. It is important that we recognize, I think, that we are merely following God’s call to renounce our human pettiness—and to realize that God is already out in front of us in this regard. I do believe that the Virgin Mary visited Indigenous Christians in 1531, spoke to them in their own tongue and charged them to build a church that would be theirs. It took more than 200 years for the Roman Catholic Church to afford Guadalupe papal honours. Canadian Anglicans signed off on the idea of Indigenous self-determination, in their own context, later still.

We have as a church, at times, been behind God in appearing to and advocating for the people rejected by (or crushed under) empire. Yet now—and especially in a time of pandemic—we are blessed by a God who reminds us of our duty to let go of our differences, that we all may be one. Thank God that God is ahead of us.

Table of Contents | About Epiphanies | Next Story »