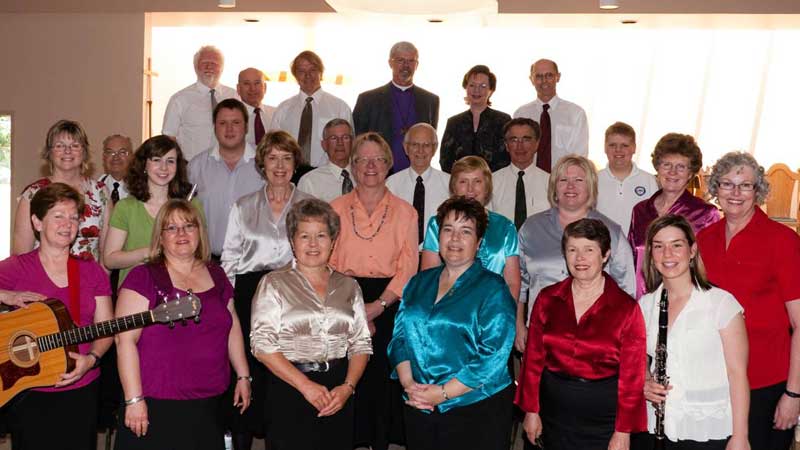 For some, music is the most hallowed of all the human arts-the most spiritual and the most akin to the invisible yet somehow palpable presence of the divine. Perhaps it was with this in mind that Toronto jazz-pianist-turned-businessman Arthur Edwin James Fulford allocated funds in 1973 for a charitable trust to develop and enrich sacred music in the Anglican Church of Canada.

“Ted was always passionate about music and performing,” says Richard Fulford, 89, the youngest of the four Fulford brothers. “He loved to produce old-fashioned church minstrel shows, where he always played the interlocutor, and he was an accomplished pianist and organist.”

Ted, who was born in 1911, used to practise the organ at St. Thomas (Huron Street) Church, in Toronto-until the rector caught him blasting out jazz and blues on the pipes. “Our parents always had hopes that he would become a concert pianist,” says Richard.

Instead, Ted put his ivory-tickling talents into a jazz band called Ted Fulford and His Harmony Boys, which performed in the 1930s and 40s on Ontario’s thriving summer resort circuit and a Toronto radio station. Later, the enterprising jazzman and parishioner of St. Chad’s Church on Toronto’s west side went on to do well in the insurance industry and real estate investment.

Today, Ted’s love of sacred music still resonates in the Fulford Trust, which is administered by the Anglican Foundation of Canada. Each year, the trust supports a broad range of musical projects-from aiding regional music schools and training organists and choirmasters to publishing Canadian church music and subsidizing the travel expenses of choirs.

One unique beneficiary is the Victoria-based Bishop’s Gospel Choir of British Columbia. The ensemble was born in March 2007 with the support of the Rt. Rev. James Cowan, Bishop of British Columbia. Its mission is to bring the gospel to those in need in the community and to support indigenous young people through the First Nations Youth Bursary.

“I wanted our music to bring comfort and company to people with long-term illnesses, especially those in extended-care units and those suffering from Alzheimer’s disease and dementia,” says Mary Rogers, the choir’s founder and director.

Named for four evangelical gospels of the New Testament, the travelling choir has 30 singers and several instrumentalists, who join the choristers for concerts. The trust has generously assisted the choir and helped to stock its library of choral music.

The choir also has a strong commitment to Canada’s indigenous people. Last June, the group performed a benefit concert for a Chemainus family whose home was destroyed by fire. “We raised enough money to replace the major appliances they lost and to buy the family a laptop computer for their school-age children,” Rogers says. After the concert, the choir developed the First Nations Computer Technology Fund, which purchases laptops for aboriginal post-secondary students.

For Rogers, the choir has been far more than a musical experience. “Personally, this choir-its mission, members and audiences-has inspired me to dream big, to recognize the many needs for comfort and assistance that exist within and beyond our local parishes,” she says.

On the opposite coast, the Rev. Chris Hayes serves as administrative director and chaplain of the Choir School of the diocese of Fredericton. Founded in 1958, the New Brunswick school is home to about 60 choristers ages eight to 16, who, with support from the Fulford Trust, spend a week each summer honing their skills in sacred music.

The program typifies the special place reserved in the trust’s mission for the musical training of young people. “The trust has been really incredible for the school,” says Hayes, who attended the school as an instrumentalist before he was ordained.

Based at the Rothesay-Netherwood School for Girls near St. John, the residential program combines top-notch choral training with Christian education and camp-like recreation each summer.

One alumna of the program is Elizabeth Stockall, 20, who began attending the school at age eight and has been a counsellor for the past four years. “It’s been a huge influence on my life, both in the friendships that I’ve made and in my academic studies,” says Elizabeth, now in her second year of a Bachelor of Music program at Mount Allison University in Sackville, N.B. “I’ve been able to take so much from choir school and apply it to my life because the program teaches us not only musically but also how to be good Christians.”

In Ontario, the trust aids choristers who need assistance to attend the Toronto Diocesan Choir school for Girls, held for two weeks every August at the Trafalgar Castle Girls’ School in Whitby, Ont. And last year, the trust helped the venerable Cathedral Church of St. George in Kingston to establish a children’s choir under the direction of Brad Barbeau.

More than three decades after his death in 1978, Ted Fulford’s generous gift continues to promote the study and performance of sacred musc. In 2009, the Fulford Trust awarded a total of $22,000 to applicants in dioceses across Canada.

“Music is a powerful thing, and it’s amazing what can happen when people of diverse backgrounds come together to help out those around us who need it most,” says Rogers. No doubt Ted Fulford would say amen to that. Ω