I have always felt that when Jesus suggested to his disciples that they relate to God as a loving father, he was doing so because of his own loving relationship with the man he would have regarded as father, especially in his early years of childhood.

Recently I noticed in my Church Desk Diary that the lectionary of the Evangelical Lutheran Church of Canada has named in a new way the figure that Jesus would have looked to as parent. He is called Joseph: Guardian of Jesus, and the day on which we give thanks for his life is March 19.

I feel that the best way to meet him is to try to grasp what it might have meant for him to wrestle with an experience that must have been life-shattering. I imagine him trying to come to terms with what the woman he loved has just told him. I think it likely that the hour is late at night, perhaps even not long before dawn, a time when we often wrestle with troubled thought, and when we sometimes dream…

In desperation he tried to force himself to think clearly. There were only two things of which he could be certain. The woman to whom he was publicly betrothed was, by her own word, pregnant. At the same time he was only too aware that he himself was not the father of the unborn child.

Certain courses of action were open to him. One was to divorce as quickly and as quietly as possible. He had absolutely no wish to bring shame on anyone, least of all the girl for whom he had deep affection as well as deep respect for her family. Again and again he searched for some other course of action that might help. Exhausted and miserable, he slipped into troubled and restless sleep.

Years later, whenever he thought about that night—and he would remember it for the rest of his life, particularly when he would look at the growing boy who worked with him at the bench—he could never be sure whether the encounter had been dreamt or experienced in some mysterious reality beyond normal experience. The figure that addressed him was majestic yet neither fearsome nor threatening. He had felt cared for and valued. Even such words would always be insufficient to describe the encounter.

He knew immediately that the figure was an angel. All his life since childhood he had been told of such visitations. What was disturbing and astounding was that he should be the recipient of such an encounter.

The voice was rich beyond description, gentle and reassuring. The very first word was his own name, spoken in a way that utterly affirmed and respected him. “Joseph, son of David, do not be afraid.” Only in that moment did he recall that Mary, speaking of her own encounter, had likewise been assured that there was no need to fear. The voice continued. “Do not be afraid to take Mary as your wife, for the child conceived in her is from the Holy Spirit. She shall bear a son.”

He realized that he had no idea of the meaning of what was being said to him, but for some reason it didn’t seem to matter. He felt himself to be in a state of utter trust. Things would be as this voice said they would be, no less, no more. So securely was he held within the aura of the visitor that he took a moment to realize that the voice had taken on a commanding tone. “You are to name him Jesus,” he was told. The tone was quiet but brooked no question nor failure to respond.

Suddenly he knew why the messenger had come. Suddenly he realized the one thing that in his fear and confusion he had been withholding—his acceptance of the child that lay in Mary’s womb. That acceptance, freely given, was the one thing needed to make this boy not only Mary’s son but his too. Now he knew the reason for the immense gift of this visit. He had been given this gift to show him that there was a gift he had to give to this unborn child. His life was now for only one purpose: to bring up the boy, to treasure him and to love him for whatever years lay ahead. 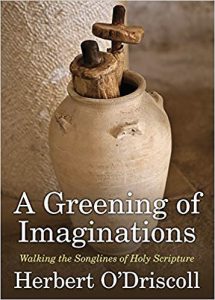 Tears welled up in Joseph as he felt acceptance and gratitude flood over him. The angelic aura began to dim until it was no longer present. As it faded, the first rays of the morning sun splashed across the walls of the simple workshop in which he slept.

From now on, he thought, there would have to be a home, however simple, a home for his wife and for the boy. Who knows, he might yet make a good carpenter of him. Tears welled again, but this time they were tears of joy.

Excerpt from the book A Greening of Imaginations—Walking the Songlines of Holy Scripture, published by Church Publishing Inc., New York. Available on Amazon.