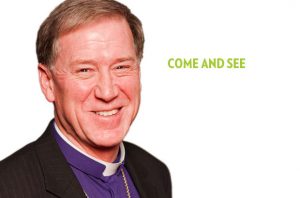 O God,
Your Son made himself known to his disciples
In the breaking of bread.
Open the eyes of our faith,
That we may see him in his redeeming work,
Who is alive and reigns with you and the Holy Spirit,
One God, now and forever.
—Book of Alternative Services, p. 338

In a number of the stories of the Resurrection we see a pattern in which “the eyes of the disciples are kept from recognizing the Risen Lord” (Luke 24:16). In his yearning that they may know he is risen, he speaks a word or does some deed that enables them to recognize him.

Mary Magdalene mistakes him for the gardener. Through a veil of tears, borne of grief over his death, she does not recognize him. He speaks her name and they are reunited in joy.

Thomas cannot believe the testimony of the disciples that the Lord has appeared to them. A week later, Jesus invites Thomas to touch his wounds and they are reunited in peace.

The two disciples walking to Emmaus find themselves accompanied by another traveller. Drawn into their conversation, he invites them to continue talking about the things that had happened in Jerusalem in recent days. As they continue walking, he helps them understand those things from the perspective of the Scriptures. As evening approaches, they ask if he will stay with them. When he breaks bread with them, they are reunited in a communion that makes their hearts burn within them.

Peter and a few other disciples go fishing, but they catch nothing. From the shoreline comes a voice directing them to cast the net to the right side of the boat. The haul is enormous. Most of them do not recognize that it is Jesus—only the beloved disciple. He knows that voice even through the morning fog. When they all get to shore, they see that he has prepared breakfast for them. “None of them dared to ask him, ‘Who are you?’ because now they all knew it was the Lord” (John 21:12).

Saul of Tarsus does not recognize who is speaking to him on the road to Damascus. He asks, “Who are you, Lord?” and the Lord tells him of his plan for Saul’s ministry as apostle to the Gentiles. Scales fall from his eyes and he lives to serve the Risen Lord.

As I recall these stories throughout the festival of Easter, I find myself thinking about our own eyes, and how they are sometimes kept from recognizing the Risen Lord in our midst. We seem at times to be so preoccupied with worry about the Church and its future; with anxiety about decline in membership, attendance at worship, and revenues to support our ministries. At times we are overwhelmed with a longing for what is no more, and with uncertainty over what will be.

The gospel of the Risen Lord invites us to hear his voice afresh, be it in some garden, or some upper room, from across a table or some distant shoreline, along some road or path less travelled.