‘Ten months away from the next flood’: deluge now a fact of life, Ottawa-area priests say

Floodwaters menace a house beside the Ottawa River in Gatineau, Quebec, May 2017. Once again this spring, the Ottawa area was subjected this spring to record-setting floods. photo: Clarke Colin/Shutterstock

As record-breaking floodwaters began to recede along the Ottawa River, priests in two of the hardest-hit areas were wondering when the next deluge will sweep the area—and how faith organizations can be better engaged when it does.

“The height of the crisis is done, but we were way above the 2017 flood levels, and they were a hundred-year flood,” said Canon John Wilker-Blakley, incumbent at the Parish of March, a three-point parish sitting on the south bank of the Ottawa River west of Ottawa. “I think we’re all beginning to feel that we really are only 10 months away from the next flood, since it’s happening so often now.”

The Rev. John Stopa, incumbent at the nearby Parish of Fitzroy Harbour, a two-point parish that also abuts the river, said frequent floods are now “a fact of life” for those who live in the area.

In April and May of 2017, areas around the St. Lawrence and Ottawa Rivers were hit by floodwaters at once-in-a-century levels, according to a Quebec provincial government official. Two years later, this spring, those levels were surpassed.

In 2017, Stopa said, the flooding affected parishioners in only one of the two points of his parish; this year it was both—and the effects were more severe.

“Entire streets were flooded out…. [People] had their basements flooded; in some cases it went up to the main floor,” he said. “I’ve had parishioners who had to leave their homes for days and go and live with relatives. I had a warden who…had to sit there at his house and make sure the pump was working, and pray that there wasn’t a power outage or anything like that, but watch as cottages on either side, which were up on stilts or bricks or what-have-you, were knocked off completely and flooded and gutted. So there’s a lot of devastation all around.”

Members of both parishes joined other local volunteers in helping build walls of sandbags around threatened homes. They also took part in a drive for gas coupons to fuel the gas-powered generators used by homeowners to power their pumps.

Stopa’s parish, which both priests said was the harder-hit, also held a drive for snacks to hand out to people battling the flood. Wilker-Blakley offered the parish hall of one of his churches up to local authorities in Kanata and the church’s labyrinth for anyone who wanted to relieve their stress. He also emailed other churches in the area about the need for volunteers and gas coupons.

Some are concerned that the floods of recent years—and those expected in years to come—may mean their property has lost much of its value, the priests said. But unlike the province of Quebec, which has announced partial buyouts of homes in flood plains and incentives to move to higher areas—Ontario has no plan to fund homeowners who now find themselves living in flood-prone areas and want to move.

Wilker-Blakley, who is also the ecumenical and interfaith officer for the diocese of Ottawa, said he’s been working with other religious leaders in the area to raise the profile of faith organizations as potential partners in disaster relief.

“It’s very haphazard right now—the city gets engaged, first responders get engaged, but churches and other religious communities tend to get called as an afterthought” when disaster strikes, he said. Sometimes their potential to provide help doesn’t end up being fully actualized because of this. For example, he said, members of a local Muslim association had been helping with relief efforts, but the association was not told about the need of homeowners for gas coupons.

“We need to get whatever credibility is necessary so that we’re on the early call list, because we have incredible resources to bring to a natural disaster, whether it’s a tornado, a flood and so on,” Wilker-Blakley said.

A tornado touched down in the Ottawa area June 2; a number of tornadoes ravaged the area last September 21.

Stopa agreed. For him, the problem extends beyond just natural disasters to social services generally.

“The (for lack of a better term) secular world—the other NGOs and the government—doesn’t always see us as partners,” he said. “And we can be, because we’ve got space, we’ve got volunteers, we’ve got access to other resources that they don’t have. And we’ve got them easily at our fingertips, so we can do stuff quickly.”

Cover photo: Floodwaters menace a house beside the Ottawa River in Gatineau, Quebec, May 2017. Once again this spring, the Ottawa area was subjected this spring to record-setting floods. Photo: Clarke Colin/Shutterstock

Tali Folkins joined the Anglican Journal in 2015 as staff writer, and has served as editor since October 2021. He has worked as a staff reporter for Law Times and the New Brunswick Telegraph-Journal. His freelance writing credits include work for newspapers and magazines including The Globe and Mail and the former United Church Observer (now Broadview). He has a journalism degree from the University of King’s College and a master’s degree in Classics from Dalhousie University.
PrevPreviousGlobal danger, spiritual danger
NextGeneral Synod passes environmental justice resolutionsNext 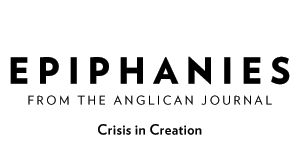