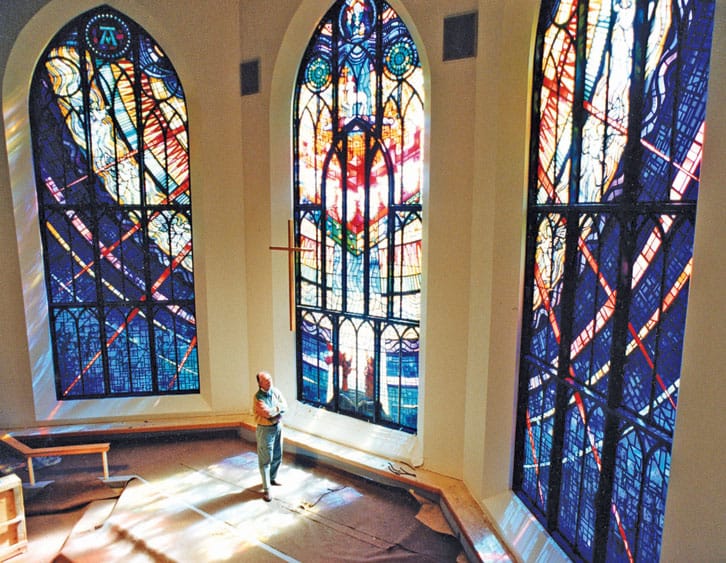 The stained glass windows of Christopher Wallis have been unveiled by the Queen, photographed by Karsh, exhibited in the Museum of Civilization and chosen by Canada Post for an international stamp. Each design is as unique as a thumbprint.

In the small Ontario town of Petrolia, parishioners of Christ Church are amazed to learn their well-loved 13 stained glass windows are the work of one of Canada’s leading artists, Christopher Wallis.

For years, they have known their Memorial Window was special. Installed in 1983, the massive window incorporates the entire oil heritage of this historic town known as “Canada’s Victorian Oil Town.” Visually stunning, this exceptional window was granted Ontario Heritage designation in 2004.

While the Petrolia parish has taken pride in their stained glass windows, it has only recently learned of Wallis’ stellar career as a stained glass artist. Other parishes with Christopher Wallis windows may be equally surprised.

His windows grace Rideau Hall in Ottawa (two unveiled by the Queen), Osgoode Hall in Toronto and Government House in Victoria, as well as the University of Western Ontario and the University of Alberta. His list of noteworthy commissions is extensive. And throughout Canada, his stained glass windows are celebrated works of art in many Anglican churches. His art is famous; his name is virtually unknown.

His most remarkable commissions for the Anglican church can be found at two Christ Church Cathedrals, one in Ottawa, the other in Victoria. The Ottawa cathedral honoured its 150th anniversary with Wallis creating a magnificent West Window towering over the entrance. Yousuf Karsh photographed it for the special publication produced for the window’s dedication in 1982.

The cathedral’s committee wanted the window to be “religious, depicting the history of the Ottawa-Hull area” with the lesser themes of discovery, settlement and confederation. It was also to reflect Canada’s multicultural nature and “it should emit a sense of hope and confidence in the future.”

In this tapestry of glass, Wallis has deftly woven in images of the Parliament Buildings, the cathedral, heraldic shields, Christ, the Virgin Mary, the Holy Spirit and John the Baptist. Symbols and stories abound in this window, all lovingly detailed in a 24-page booklet from the cathedral.

Wallis’ window at Christ Church Cathedral in Victoria comprises three Gothic arched windows in the Chapel of the New Jerusalem. Installed in 1994, they measure an incredible seven metres high and three wide. The design, one huge image of St. John’s vision of the New Jerusalem, was hailed as “ravishing, radiant and a revelation” by Robert Amos, the arts reporter for the Times Colonist. Wallis, he wrote, “has made a lasting contribution to the cultural environment of this city.”

In the tiny Ontario hamlet of Arva, north of London, is the Church of St. John the Divine. Here, his Memorial West window is entirely based on the ecclesiastical sonnets of the 19th-century poet William Wordsworth. At St. Paul’s Anglican Cathedral in London, Ont., a huge series of windows was added between 1991 and 1996. One window traces London’s history from 1893 to the cathedral’s coat of arms in 1989. In another, Wallis encapsulates the full nativity story.

St. Mark’s Anglican, in Brantford, Ont., prides itself on having eight Wallis windows including one commemorating the history of Scouting and Guiding. And when Trinity Anglican Church in Cornwall, Ont., wanted something extraordinary for its 200th anniversary in 1987, they chose Christopher Wallis to create six masterful stained glass windows for the church entrance.

The design of each window he creates is painstakingly tailored to reflect the themes, symbols and history most cherished by a particular church.

St. Stephen’s Ukrainian Catholic Church in Calgary asked Wallis to design in a Byzantine style. A detail from one of these windows, showing the Madonna and Child, was chosen by Canada Post in 1997 to be featured on an international Christmas stamp.

In all, Wallis has created more than 800 windows since arriving in Canada in 1957 from Britain. He opened his studio in London, Ont., and his works can be found in more than 20 churches there. In 1968, he helped found the Environmental Art Program at Fanshawe College in London, Ont. Trained in England at the Hammersmith School of Arts and Crafts, he apprenticed at the renowned studio of Martin Travers and Lawrence Lee.

His first love is heraldry and in addition to being a fellow of the British Society of Master Glass Painters, Wallis is a fellow in The Royal Heraldry Society of Canada.

Soft-spoken with a trace of a British accent, Wallis is busily working past the standard retirement age. His two new windows for Victoria Hall in Petrolia are to be unveiled in May 2011. Ω

Patricia McGee is the author of Wonders of Light:The Stained Glass Art of Christopher Wallis and The Story of Fairbank Oil.