Stott says Christianity must be true and relevant 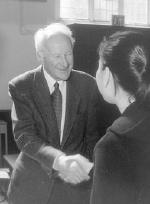 Evangelist Rev. John Stott speaks to faculty and students at Wycliffe College on a recent visit.

A PROMINENT Anglican evangelical conservative based in Britain, Rev. John Stott, recently spoke in Canada on Christianity and tradition and commented upon the irregular consecrations of two American bishops.

Dr. Stott was the Queen’s chaplain for 32 years and has written 37 books. For 55 years he was rector (now rector emeritus) of just one parish, All Souls, London.

Dr. Stott, 79, addressed the faculty and students of Wycliffe College in Toronto on March 24. He said, “The health of the church depends upon the word of God preached. The pew can seldom rise higher than the pulpit.”

He believes nothing undermines preaching more than skepticism about the biblical text. “I pity the preachers who enter the pulpit with no Bible in their hands or with a Bible more rags and tatters than the word of God. They cannot expound Scripture because they have no Scripture to expound.”

Dr. Stott spoke of “the double authorship” of the Bible. “Divine inspiration is not dictation. It does not smother the human personalities of the authors. God spoke through human authors so that their words were simultaneously His word and His word were simultaneously theirs.”

Yet he acknowledges there is “a cultural chasm” that yawns between the biblical text and the modern world. “Even in new translations it feels odd, it sounds archaic, it looks obsolete and it smells musty.”

Christianity needs to be both true and relevant, he said. “The great tragedy in the church today is that evangelicals are biblical but not contemporary, while liberals are contemporary but not biblical. We need faithfulness to the ancient word and sensitivity to the modern world.”

Preachers have to listen to the world’s “many discordant voices: the cries of the poor and oppressed, the questions of the bewildered, the sighs of the hurting. We listen to the body broken. We are called to double listen.

Gail Henderson, who was at the lecture, said Dr. Stott’s Basic Christianity (1958) profoundly changed her life. Living in the remote Ontario community of Ignace, she found the bestselling book “integrated head and heart, grounded me and put me on a journey.”

Today Ms. Henderson is a master of divinity student at Wycliffe and a postulate with the Diocese of Algoma. “I sensed Dr. Stott’s humility before the word of God when I read Basic Christianity in the late ’70s and again as I heard him speak at Wycliffe.”

Rev. Barry Parker of St. Paul’s Church, Bloor Street, in Toronto, said he considers Dr. Stott’s Between Two Worlds (1982) to be one of the most brilliant books on preaching.

With his book royalties, Dr. Stott has established the Langham Trust, which has provided books and 100 doctoral scholarships at Western seminaries to promising, young, evangelical scholars from the developing world.

A bachelor, Dr. Stott is affectionately known as “Uncle John” to hundreds of Asian and African young people. Remarkably he corresponds with 1,400 people worldwide.

In an interview after his lecture, he said he “rather regrets” the recent consecrations in Singapore of Americans John Rodgers and Charles Murphy.

“It was irregular, but it may prove to be right and necessary.” He considers the new bishops, whom he knows personally, to be “very fine, godly, thoughtful men.”

For Dr. Stott their consecrations do not signal the end of the Anglican Communion.

“I regret our evangelical witness has not been stronger. I believe it is possible to overcome liberals at their own game. Some Anglican liberal bishops are not the scholars they claim to be. But we evangelicals haven’t produced the books to overthrow them.”

Dr. Stott does not believe that some African and Asian bishops were manipulated by wealthy conservatives at the 1998 Lambeth conference as some maintain. “They may not all have academic scholarship but they are men with good minds. They know what they believe. They believe in revealed truth.”

So does John Stott.