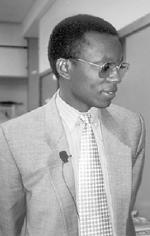 “I want to confess before God and all of you the sins I committed when I was still in darkness. A time like this gives me the opportunity to off-load all the burden of guilt I had on my heart and I’m even prepared to confess before the judges because the Lord has emboldened me by his forgiveness. I took part in the killings in my neighbourhood. I looted and I participated in the destruction that happened during 1994. But now the Lord has changed my life and I want to tell everybody I’m now a different person…”

Antoine Rutayisire heard these words as he led a day of prayer and fasting with prisoners inside Kigali Central Prison in Rwanda. Mr. Rutayisire (pronounced Root-ah-yee-see-reh) is an Anglican lay evangelist working with African Enterprise in a ministry of healing and reconciliation.

He told of his experiences in an interview in Toronto in November, during his national speaking tour with African Enterprise Canada.

Just two weeks after his ministry in prison, over 1,000 inmates confessed to their crimes when the chief prosecutor of Kigali City visited them. In the five years before, only 10 had come forward, Mr. Rutayisire said.

In the spring of 1994 Rwanda experienced a genocide by the Hutu majority against its minority Tutsi population. An estimated 800,000 Rwandans, mainly Tutsis, died in primarily machete attacks. Even newborns were not spared. Another 200,000 died in refugee camps in the Congo, often from exhaustion or cholera. UN peacekeepers withdrew at the height of the genocide.

Is healing possible in a land where almost a million people were massacred in a hundred days?

After such a hell on earth, there has been something of a small spiritual spring. African Enterprise has worked with 4,500 widows and 20,000 orphans, tracing the families of orphans and providing foster care for others. They have also offered counselling seminars on reconciliation.

“Spiritual healing is Rwanda’s greatest need,” Mr. Rutayisire said. It was a need the Tutsi had to grapple with in his own life.

As a five-year-old, he had witnessed the murder of his father by Hutus. He survived an outbreak of violence against Tutsi students in elementary school and was almost killed during his university studies. He lost a hard-earned university lectureship due to discrimination against him as a Tutsi.

“I was very angry because there was a long list of people I hated with cause. But it was during this time in 1983 that I met the Lord,” he said. He pleaded with God; “Do I really have to forgive the people who killed my father?”

When he finished the list of offenders he asked God to help him forgive them. “I had to give away my right to hate. When I finished that exercise, 20 years of hatred and bitterness were wiped out in one day.”

Eleven years later, at the height to the genocide, Hutu militia came to his front gate. His natural instincts were to protect his wife and children, to “go out and die like a man.” But he heard the voice of the Lord saying, “Why don’t you die like a Christian? You’ve been preaching that you can love your enemies. This is your opportunity.”

“The offended always holds the key for reconciliation. My life changed by looking at the cross of Christ. On the cross, God the victim, took the first step of forgiving. The cross gives hope to both the guilty and the grief-stricken, to the offender and the offended. Christ is both sin-bearer and sorrow-bearer (Is. 53:4). God removes sin and bitterness.”

Wounded emotions fester and spread down the generations unless addressed, Mr. Rutayisire believes. “You may have the right to hate but it is a destructive hate. You become a victim again.”

In 1999 the Rwandan government allowed Mr. Rutayisire to preach in the prisons where most of the 120,000 accused in the massacres are held. Mr. Rutayisire does not stress the wrath of God to prisoners.

“They already know his wrath. The prisoner is often already angry at himself and has built a hard shell. We stress the ever-present love of a God who hates what you have done. You can’t cheat with God. As you talk about the love of God you see the shell melting.”

The lay leader teaches that there are two kinds of forgiveness. In two-way forgiveness, the offender confesses to the offended, seeks forgiveness and is pardoned.

Then there is unilateral or one-way forgiveness in which you forgive the one who has wronged you, even if he shows no remorse. Many offenders deny any wrongdoing. “While you may have a right to hate, you deprive yourself of an opportunity to heal if you don’t forgive. It eats you up.”