Former Archbishop of Canterbury Rowan Williams and Canadian philosopher Charles Taylor have called for more openness and dialogue among different faith traditions, saying there can be no single definition of religion that will fit all cases.

Williams joined Taylor in a “conversation” September 15 that was the keynote event in a weekend conference organized by the Centre for Research on Religion, an interdisciplinary arm of McGill University’s School of Religious Studies.

There needs to be more exchanges between people of different traditions, said Taylor, a prolific author of books, including A Secular Age. Taylor is also widely known for having co-chaired, along with sociologist Gérard Bouchard, a Quebec provincial commission that recommended a ban on religious symbols worn by public servants in positions of “coercive authority,” including judges and police officers.

In the wake of the Quebec City mosque attack early this year, Taylor reversed his position, arguing it was no longer appropriate in today’s climate.

“There is no possible ethical position that does not involve dilemmas. The world is just too complicated,” said Taylor. “The rule book can be great, but then you can’t live up to it. Without cultural development in society, a rule book is of little use.”

Williams agreed, noting that “a rationalist secularism that silences other voices” has given rise to problems. “The state acts as it does because the culture is as it is. We need to have more argument in public.”

Williams said this holds true for both politics and religion. “If the church is what we say it is, then we will always have something that we need to learn from the other,” he said. “And if democracy is not to be just authoritarian tyranny, this assumes ongoing argument. But this argument should be managed justly, peacefully and purposely.”

Today, Williams said, it too often seems that people are being offered an unappealing religious choice between authoritarianism and the pious sentimentality of “beautiful souls.”

The forum also touched on the topic of the jihadist group Islamic State, and Williams noted that although critics sometimes refer to it as medieval, it is not really medieval enough.

Williams said that even though the Islamic State evokes an imagined past, characteristics like pressure toward uniformity make it quite modern, like other fundamentalist groups.

“They set out to define a market share and then attract people to it. That’s modernity,” said Williams, a renowned scholar, author and head of the Church of England and worldwide Anglican Communion from 2003 to 2012. 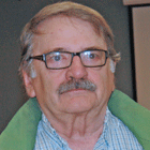 Harvey Shepherd is a freelance journalist in Montreal.