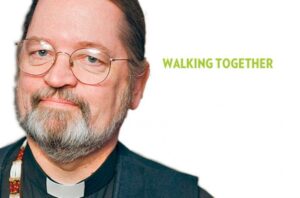 The early Christian church spent the greatest portion of its time on matters of spiritual formation. Every aspect of teaching and practice was oriented toward shaping people who would reflect the life of Christ in their daily living. Although this was a special concern for those desiring baptism, it was also a general theme of the teaching and practices associated with every Christian gathering.

Our Christian ancestors considered it a great challenge to live in a way that was counter to the broader culture. Every Christian needed to be shaped by the way of Jesus, if there was to be any hope of living faithfully in the midst of direct and indirect opposition of the larger society.

This concern for spiritual formation has never been completely lost or forgotten.
It subsists in our contemporary attempts to provide orientation for those who wish to be baptized or confirmed. It appears in the moral and spiritual teaching of our weekly Christian gatherings. But spiritual formation has an element that would be seen as quite foreign to the early church.

We leave much of the formation of attitude, spirituality and daily practice to our participation in the larger culture. It is not hard to understand why this is so. Our contemporary church is only a short time away from a period when the broader culture was much more influenced by Christian thought and practice. During those years, formation happened through regular and common participation in a number of different societal organizations and institutions. It was possible to approach spiritual formation in the church as a kind of finishing school, affirming much that was already there in the culture and adding a distinctive, often denominational, flavour to the whole.

The spiritual formation associated with the church assisted participation in the larger culture; it was a part of being a good citizen. In turn, it was expected and hoped that daily living in society would be mutually reinforcing with church life.

Today, society has a diminishing memory of Christian teaching. The mainstream values of our culture of money would be quite troublesome to our Christian ancestors. We seem, however, to follow the now out-of-date practice of letting most of our formation happen outside of our Christian faith.

Our imaginations and values are greatly shaped by our immersion in the broader culture, which, through technology, has become all-encompassing in a way that our ancestors would find unimaginable. If we are to reclaim our souls, we need to return to the early church’s focus on spiritual formation.