(Republished with permission from the diocese of Fredericton eNews.)

Three counties, 240 kilometres, 15 days — the diocese of Fredericton bishop’s third annual pilgrimage was complete as of Sunday, with a service at St. Philip’s Anglican Church in Moncton.

This year Bishop David Edwards chose the Archdeaconry of Moncton in which to walk. He and walking partner Trevor Fotheringham began the trek on Sunday, May 24 after the morning service at St. Paul’s Anglican Church in Browns Yard, on the Richibucto River, to St. Matthew’s Anglican Church in Harcourt, a 21-kilometre walk.

That set the pace for the longest pilgrimage yet. On Wednesday, June 7, a visit to Riverglade found a group of nine walking from Petitcodiac to Salisbury in the Parish of Salisbury and Havelock. One pilgrim was from the Parish of Richmond, Cindy Derksen, who has joined the bishop for a day’s walk all three years.

“It’s a wonderful outreach,” she said. “I enjoy supporting the bishop. I hope I can do it each year.”

Minnie Estabrooks, a parish member from the area, was also along for the day.

“I wanted to come and support the bishop,” she said. “So I’m walking to Salisbury today.”

There has been great support for the bishop and the pilgrimage, said Trevor.

“We haven’t been walking alone for any part of the pilgrimage,” he said. “And the hospitality in every parish has been excellent.”

The Rev. Chris Hayes was in day two of three days of walking with the bishop in his parish.

“I’m feeling better than I thought I would,” he joked. “I was prepared for exhaustion, desperation and senility!

“We had a meet and greet last night,” he said. “It went really well. It was a nice, light-hearted discussion and it was very helpful too.”

This is the second pilgrimage for both Maren and Allyson Caldwell, who will run the Leaders in Training program at camp. Kyle McGraw, another staffer, swapped his 6 a.m. run for the trek with the bishop.

Bishop David said the pilgrimage was going just as he hoped and he was achieving the goals he set: to get to know the archdeaconry and the people in it better, and share the message of Jesus with others.

“We’ve had a great reception all the way along,” he said. “I am grateful to all the parishes.”

He noted he’s been “fed excellently!”

The bishop especially enjoyed the hike to Dickson Falls in Fundy National Park the day before.

“We’ve had some good off-road walks around Riverside-Albert and Hillsborough,” he said. “And we had a great time walking up Shepody Mountain.”

With lunch time looming and the temperature heating up, Chris arranged to have the former St. Peter’s church in Riverglade opened. Just off their route to Salisbury, St. Peter’s is in the process of being sold but it offered a respite from the heat and a place to say Mid-day Prayers.

After lunch, it was back on the road for the remaining eight or nine kilometres to Salisbury.

The pilgrimage, however, was not without controversy. The week before, during his walk in the Parish of Shediac, the bishop met several people and a CBC camera crew on his path who were there to confront him about an ongoing issue that has been in the news — the parish’s proposal to lease some of its land to a developer to build a large campground.

Opponents took the opportunity to talk to the bishop in person. Chancellor David Bell was walking with the bishop that day. Here is his first-person account:

“As we were walking a trail, two men approached and engaged the bishop in quite a discussion. Then as we rounded the next bend we found other concerned citizens in wait, together with a CBC camera crew. One of them made his case to the bishop while the CBC filmed and then the bishop gave a short interview.

“Still later, we were joined on our walk by another person concerned about the potential development. All of the interactions were polite and involved the bishop listening and then explaining that he and Diocesan Council would not be considering the Shediac development for some time.

“The parish can apply to diocesan authorities only if it has environmental and other clearances already in place, a process still going on. Bishop Edwards is quite aware of the Shediac situation but his pilgrimage allowed him to hear from people personally.

“I was impressed by his stamina in making those same explanations over and over again,” said Chancellor Bell.

The CBC story that resulted from the encounter said the bishop thanked the concerned citizens for their insights, adding “it would help his thought process.”

You can view the CBC story here.

Next year’s pilgrimage is tentatively set for the Archdeaconry of Woodstock. You can read and comment on the bishop’s pilgrimage blog here.

(Editor’s note: An earlier version of this story had an incorrect photo caption. It has now been changed.) 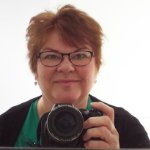 Gisele McKnight is editor of the New Brunswick Anglican, the diocesan newspaper of the Anglican diocese of Fredericton. She is also communications officer for the diocese.