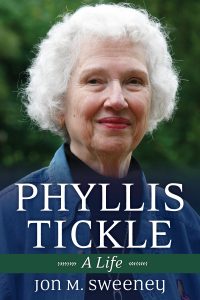 Phyllis Tickle: A Life will appeal to those who admire the prodigious talents of the late Episcopalian author, poet, essayist and marketing force behind North American religious book publishing. It also offers a broad context of the emerging church movement circa 2005 in America and manifested in the U.K., Canada and elsewhere.

Biographer Jon M. Sweeney captures the essence of Phyllis’s gift as “the ability to prophetically see what was coming, and then explain it in attractive detail…she became a prognosticator and encourager to professionals who cared about religion…” within popular culture. There is much to care about as churches experience a decades-long decline in membership that prompts a need to rediscover their missional core.

Sweeney aptly portrays a woman of towering presence and vision, one whose personal losses and struggles deeply shaped her way of being in the world. Her Tennessee upbringing, her physician husband, Sam, and their seven children, and life on a farm provide a colourful backdrop to her public life. Sweeney’s writing is journalistic in style, and at times begs for more depth. For example, the assassination of Martin Luther King Jr. in Memphis, Tenn., on April 4, 1968, and the subsequent move out of town by Phyllis and her children that night, is treated as a footnote.

Phyllis viewed the life of prayer and action as training “not for art, but for wholeness.” She was a mystic who prayed the hours five times a day for 30 years. In 1997, she began to write The Divine Hours, followed in quick succession by seasonal volumes.

She was part of an expanding network in the emerging  church movement, actively engaging with Bishop John Spong, Marcus Borg, John Dominic Crossan, Diana Butler-Bass, (former) U.S. Presiding Bishop Katharine Jefferts Schori and Nadia Bolz-Weber. Phyllis’s articulation of a church in mission for the world is evident in numerous YouTube videos, many of them based on themes from her 2008 book, The Great Emergence: How Christianity Is Changing and Why.

Canadian Anglicans have viewed their experience in forming new communities of faith more in relation to the U.K. than to the U.S. There are several scholarly homes documenting the Canadian experience, such as Wycliffe College’s Institute for Evangelism in Toronto, and the work of University of Lethbridge sociologist of religion and culture, Reginald W. Bibby. Bibby’s most recent book is Resilient Gods: Being Pro-Religious, Low Religious, or No Religious in Canada. A new report on missional projects in the diocese of Toronto, “Churches Turning Outward,” provides fertile ground for better understanding urban and suburban churches that focus on their outward calling.

All in all, Phyllis Tickle: A Life is worth reading for an appreciation of the humanity of one of its visionaries and for where her “anticipatory, prophetic gaze” has contributed to the emergence of a more outward-turning, missional church.