Nothing new in The Young Messiah

As long as there’s money in faith-based films, and there’s plenty of it, apparently, Christian audiences can expect the canon of Bible movies to continue to expand. This may be good or bad news, depending on your perspective: some say Bible movies make great entertainment, others cry heresy and still others simply want to know “Why?”

Enter the latest addition, Focus Features’ The Young Messiah, directed by Cyrus Nowrasteh and based on Anne Rice’s 2005 novel Christ the Lord: Out of Egypt.

In the opening frames we meet “the boy from Bethlehem”-played by newcomer Adam Greaves-Neal. He is brown-eyed and bathed in light, just as we’d expect the young Jesus to be. There is nothing new in the look and feel of this film. The cinematography is textbook Bible epic: slow motion flashbacks and sweeping desert vistas with big skies filled with meaningful configurations of fluffy white clouds.

The young Jesus is seven years old and about to embark on a 1,000+ km journey back to Nazareth, putting an end to his family’s exile in Egypt. Greaves-Neal does a masterful job of transitioning between Jesus’ childhood problems: bullies, a jealous brother and the perennial “Are we there yet?” to decidedly Messianic problems: Why is this weird guy in a cloak (Satan) stalking me? How is it I can make dead things live? Why don’t my parents let me use my incredible powers?

But the young Jesus does use his powers. If the gospels have been too shy on miracles for your liking and you’ve longed for that newly discovered scroll with more miracles, then you will love The Young Messiah. (“They love their miracles,” says a wiseacre Roman centurion. He’s talking about the Jewish people, but the statement applies to the audience as well.)

But miracles are a problem for Jesus because word of them has spread to the lair of the corrupt Jewish king-Herod’s excessively ringleted, petulant offspring, who lounges with a private dancer, thus fulfilling Hollywood’s first commandment: “Thou shalt have belly dancers in Bible movies-or else!”

The man-child with a crown is not pleased with all the Messiah talk coming from “witches and lizard-eaters” out there, and dispatches a Roman centurion, played by veteran of stage and screen Sean Bean, to find the boy and kill him. “You’ve done it before” he says, taunting the centurion-“it” being the slaughter of children. This exchange sets up one of the film’s primary storylines. Bean’s character is suffering from Bethlehem massacre PTSD. He acknowledges the latest child-kill he has been ordered to perform, but we can tell his heart is just not in it.

Herein lies the film’s central flaw: Roman centurion versus Jesus Christ has spoiler alert written all over it. We know Jesus survives his childhood-of this, there is no doubt. Ideally, the drama should default to the inner turmoil of the centurion, which would give the audience something more to chew on besides popcorn. Unfortunately, the script stops shy of exploring this personal dilemma to any great extent, and Bean plays it too nice from the get-go, so the Murderous Beast to Roman-with-a-Heart transformation whimpers where it might have roared.

Unlike its many cinematic predecessors, the violence in The Young Messiah has been kept to a minimum in order for it to remain, according to the filmmakers, “an uplifting film for the entire family,” which is, incidentally, the answer to that all-important “Why?” It is far more child-friendly than most biblical films, but Christian families who care about Bible-based education and don’t want to confuse their kids about the actual Bible and Hollywood’s interpretation of it will have their work cut out for them during the trip home from the movie theatre.

Lastly, and not to be overlooked, given recent attention to Hollywood’s appalling lack of diversity, The Young Messiah is yet another “whitewashed” production. Occasional brown eyes notwithstanding, when all principal players have British accents and could easily pass for guest stars on Downton Abbey, the lack of ethnic authenticity is, for this viewer anyway, an unfortunate distraction.

Michelle Hauser is a former fundraiser turned newspaper columnist and freelance writer. She and her husband, Mark, live in Napanee, Ont., with their son Joseph, and worship at the Church of St. Mary Magdalene. Her work includes contributions to CBC Radio, The Globe and Mail, Chicken Soup for the Soul and The Kingston Whig-Standard. She can be reached through her website at www.michellehauser.ca. 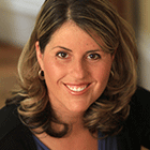 Michelle Hauser is an award-winning freelance columnist and freelance writer. Her work includes contributions to The National Post, The Globe and Mail, The Kingston Whig-Standard and numerous other publications. She and her husband, Mark, live in Napanee, Ont., with their son Joseph, and worship at St. Mary Magdalene. She can be reached at [email protected]