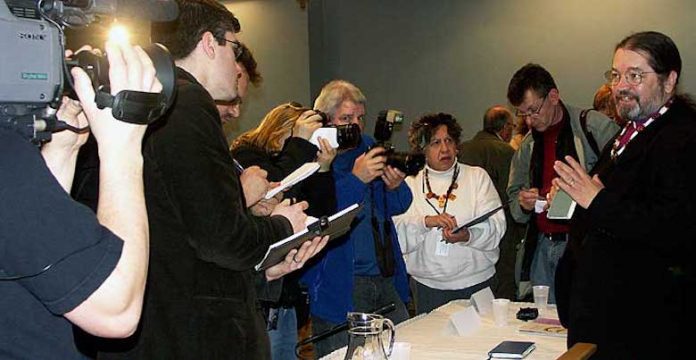 Mark L. MacDonald, the bishop of Alaska, has been named the Anglican Church of Canada’s first national indigenous bishop with pastoral oversight over all native Anglicans, a move that was described by the primate, Archbishop Andrew Hutchison, as “an historic moment” for the life of the church and the country.

“This has been the fruit of our elders’ dreams … It’s a new day, an exciting moment,” said Bishop MacDonald. “It really signals a deeper and more important reality that is the recognition by a major denomination in North America, by the Anglican Communion, the God-given structure of aboriginal authority, the God-given character of aboriginal life and culture.”

Bishop MacDonald’s appointment was formally announced by Archbishop Hutchison Jan. 4 at a news conference at the church’s national office in Toronto.

Rev. Gloria Moses, co-chair of the Anglican Council of Indigenous Peoples (ACIP), which worked on the process for selecting candidates, said she was elated at the announcement. “What a way to start the new year off,” said Ms. Moses. “This has been a long dream.”

Archbishop Hutchison said Bishop MacDonald’s appointment is a culmination of a process that began when indigenous Anglicans met in a gathering called the Sacred Circle, in Pinawa, Man., in August 2005, and presented him and other bishops there with a petition for a national native bishop.

“Never in my wildest imagination did I realize that this would happen so soon after the Sacred Circle in Pinawa,” said Archdeacon Sid Black, former ACIP co-chair. “I think it’s a very important step in the sense that the church is acknowledging, recognizing the indigenous constituents of the Anglican Church of Canada.”

Archbishop Hutchison called Bishop MacDonald’s appointment “complex,” saying that he will minister to the needs of a very diverse native population in Canada, with hundreds of different languages and cultures. “The challenge is drawing them to a common cause,” he said.

The primate also acknowledged that the appointment of a national native bishop is a move that is “not universally accepted” in the Canadian Anglican church. “Some are threatened by it.”

(Some Anglicans have voiced concern that the appointment sets a precedent for other special interest groups that might want their own bishop. Under Canadian church polity, though, bishops respect each other’s geographical boundaries.)

“But in fact, this is really the fruition of not just a political agenda but a spiritual holistic agenda for native people. I think that when people grasp that aspect of it that we’re really about being respectful of aboriginal authority, meaning that we’re not imposing something on the people but really in conversation with people with open minds.”

The setting up of a new native institution within the church is not meant “to tear something down,” he added. “We’re trying to go deeper into our relationship. What you might say is that what we’re about is to deepen the communion that we have with the Canadian church and others as well and the only way we can do that is what we might call self-determination or self-differentiation … I think people will just have to wait and see and we will have to build trust particularly with those who find it difficult. I look forward to that, that’s part of the challenge.”

Bishop MacDonald assumes his post this March until the meeting of General Synod in 2010, when he and ACIP, following nationwide consultations with native Anglicans, “will have determined what way forward it will be for them,” said Archbishop Hutchison.

As envisioned by 43 native elders who presented the Pinawa petition, the national native bishop should be one with “episcopal and pastoral responsibilities as well as full authority and jurisdiction for aboriginal communities across the country.”

Earlier, though, Archbishop Hutchison had explained that providing the national native bishop with full authority and jurisdiction would mean amending the national church canons, a process that would take three meetings of General Synod.

Bishop MacDonald, 53, said his first priority would be to learn as much as he can about issues affecting native Anglicans and “to hit the ground running,” since the clock was ticking on the three-year appointment. He said his job would involve much travel and consultations with native communities across Canada, in urban areas and reserves.

Archdeacon Black said among the concerns that Bishop MacDonald must help articulate involve issues of justice and self-determination. “Are we going to be an indigenous church or a church within a church? Certainly, we are looking forward to the leadership of the national indigenous bishop to help us through this process.”

Bishop MacDonald will be based in Toronto for the first three years, with a possibility of relocating his office elsewhere in Canada in the future. His position was described at the news conference as “a rarity in Anglican tradition” – a bishop who is pastor to a group of people irrespective of where they live, rather than to residents of a geographic diocese. In Canada, only the Bishop Ordinary to the Armed Forces is in a parallel position.

He will also be crossing national boundaries. Although he has resigned as bishop of the American diocese of Alaska, where he served since 1997, he will continue to be assisting bishop of Navajo Area Mission with the U.S. Episcopal Church.

Bishop MacDonald is no stranger to Canada, having attended Wycliffe College in Toronto and served as a priest at St. John the Baptist, Mississauga, Ont.

Born in 1954 to Blake and Sue Nell MacDonald, he has a bachelor of arts in religious studies and psychology at the College of St. Scholastica in Duluth, a master’s in divinity at Wycliffe, and post-graduate work at Luther-Northwestern Theological Seminary in Minneapolis.

He has held various positions of ministry in Minnesota, Wisconsin, Oregon and the Southeast Regional mission of the diocese of Navajoland. Before his ordination to the episcopate, he was canon missioner for training in the diocese of Minneapolis and vicar of St. Antipas’ Church, Redby, and St. John-in-the-Wilderness Church, Red Lake, Red Lake Nation.

He has served on the board of the Indigenous Theological Training Institute; the faculty of Leadership Academy for New Directions’ and a trustee of the Charles Cook Theological School in Tempe, Ariz. He is board chair for Church Innovations, Inc., member of the Episcopal Council of Indian Ministries.

A non-status Indian, Bishop MacDonald has native ancestry from both his mother’s and father’s sides of the family and said he grew up among the Ojibway people.

He and his wife of 17 years, Virginia Sha Lynn, have three children: Rose May Li, Brenna Li, and Adrian Blake.