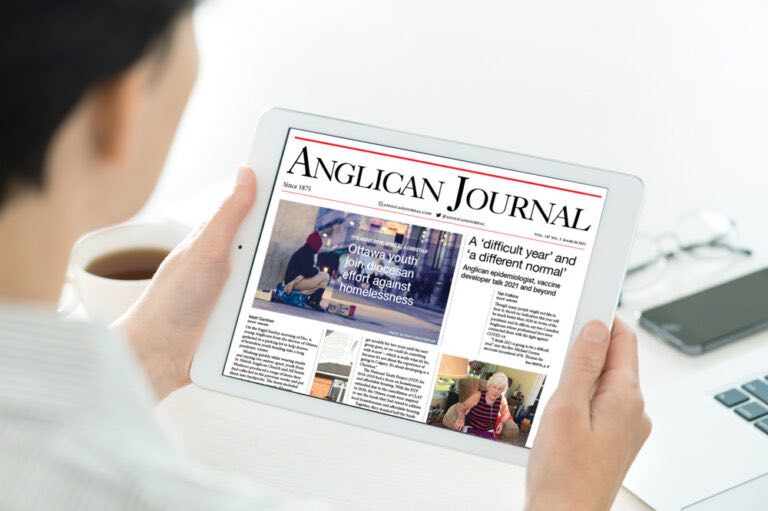 Although the virus that causes COVID-19 was publicly identified in late 2019, it wasn’t until last March that life began to change substantially for most Canadians. Since then, our lives have been transformed in many ways—if not by the disease itself, then by the myriad restrictions that have been placed on how we live. A year after the pandemic hit Canada in force, the Anglican Journal looks at some of the ways Canadian Anglicans have been affected by it, how they have been reacting to it, and what might lie ahead.

The church includes some people whose work has involved them in the fight against the pandemic, and in this issue we hear from an epidemiologist and a vaccine developer—both Anglicans—on what the pandemic might hold for the rest of 2021 and beyond. For some of those who have had COVID-19, an end to the pandemic won’t mean an end to their suffering, and we report on some “long-haulers” who are still experiencing symptoms. But even for those lucky enough to have escaped the virus itself, a sense of grief and loss is likely to follow on the heels of this stressful time, and the church needs to be ready to minister to people afflicted by it, Canon Richard LeSueur writes in a guest column.

This isn’t the only way the church can respond to the pandemic, some say; in Canada’s North, both Anglican and secular leaders are saying there could be a significant role for the church in helping ensure Indigenous people are able to get vaccinated. But you don’t need to be a health care specialist—or even an adult—to help care for others during this difficult time; as we also report in this issue, Anglican youth at two Ottawa churches have been reaching out to homeless people in the city—a group hit particularly hard by the pandemic.

The life of the church has continued, of course, through sickness and lockdowns, and we update you on a number of recent developments. The issue features a followup and discussion on homelessness with the Rev. Jonas Allooloo, a former cathedral dean and Bible translator in Iqaluit, Nunavut, who was still homeless as of press time. We also report on a development in the ongoing controversy over the marriage canon: a legal opinion received this winter by the theologically conservative Anglican Communion Alliance, written by a UK specialist in church law and critical of the Anglican Church of Canada’s approach to same-sex marriages. The issue also includes a story about a project targeting human trafficking in the Asia Pacific region, funded partly by General Synod.

The Journal wouldn’t be complete without its monthly messages by our national archbishops. In this issue, Archbishop Linda Nicholls, primate of the Anglican Church of Canada, expresses hope for a spirit of giving this Lent, especially as the pandemic makes homelessness even harder for those afflicted with it. Meanwhile National Indigenous Archbishop Mark MacDonald writes that even in its current state of exhaustion, the church is more filled than it knows with the mysterious life and power of God.

Read the October issue of the Anglican Journal on anglicanjournal.com or in digital PDF.