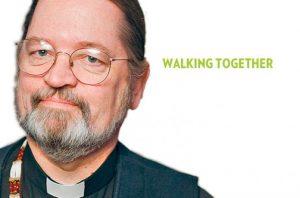 Around this time of year, the millions of Canadians who live in the south are reminded that Canada is one of the great northern countries. Though it doesn’t appear to come to mind very often—it was largely missed in conversations that accompanied our recent election—the North is an essential part of our land. A great deal of the future of Canada and of our planet is unfolding in the North.

The Anglican Church of Canada is not unlike Canada in its relationship to the North. There is some awareness of our presence there, but it is not an active part of the identity of most Anglicans. Despite the challenges in the North, the churches there continue to bring an essential element to the whole of the region, providing gospel-based spiritual community and pastoral care. With that work, we are arguably one of the most northern churches in the world, but our denomination’s attention is usually elsewhere. That is about to change. Forces—social, legal and environmental—are making Northern Canada, especially the Arctic, the place where a number of dangerous trends are coming together. The Anglican Church of Canada will be morally and spiritually tested by these trends.

The Arctic is warming three times faster than the rest of the planet. While many contemplate the horrific consequences of melting ice and permafrost, others contemplate the opportunities a warmer Arctic provides to create wealth. Because of Canada’s colonial policies, the people of the North are neither able to sufficiently control what happens on their land, nor are they able to participate fully in the wealth that is produced there. This is bad for them and the planet.

In addition to these issues, a few centuries of colonial social policy have left deep wounds among the people. Coupled with climate injustice, these conditions are a particularly toxic mix. Without full authority to oversee their land or their people, wealth, weather and economic expansion could intensify the social problems of the area.

It would appear that those least responsible for climate disaster now carry a heavy load of its consequences. This is a great problem for the planet, since the people who have been guardians of the Arctic for thousands of years are also the carriers of an environmental wisdom that could be a substantial contribution to a livable future for all. Furthermore, it seems certain that without the guardianship of the People of the Land, there will be no good way to slow down a melting Arctic and its consequences for the planet.

The Arctic will provide much of the framework of our global future. It provides a vivid warning of the coming consequences of a warming planet. It is a call for meaningful action. Close to a quarter of the world’s remaining usable land is now under the guardianship of Indigenous peoples around the globe. Many of the moral, legal and social principles that will decide the future of the Indigenous peoples of the world and their protection of their lands are being debated in the Arctic. Canada will either play a positive role in this conversation or frame it in a negative way.

During my time in the Arctic, I have heard many prophecies about a revival in the churches of the world that would begin there. I believe these prophecies. This revival will have many consequences—moral, political and spiritual. It means that we are all called to a deeper and more faithful commitment to Jesus. It also means that we are, right now, called to defend the peoples and land of the North, in the name of our God, in defence of our planet and in a commitment to justice and truth.