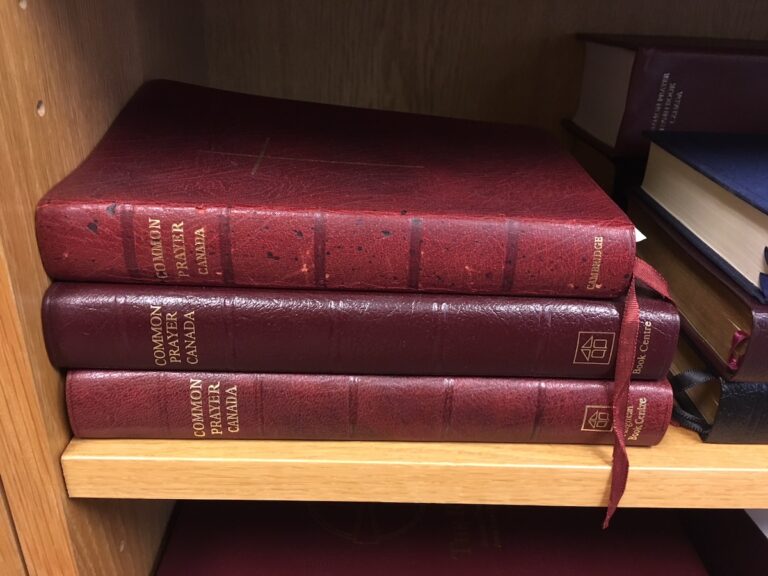 Standing together with our Jewish sisters and brothers

I write this on International Holocaust Remembrance Day. In my watching of the “Live Feed” of General Synod 2016, I must have missed the motion to remove the prayer for the conversion of the Jews from Good Friday services.

It is unfortunate that we have to wait until 2022 for this to be official (Removal of prayer for conversion of the Jews to be revisited at General Synod, Jan. 2018, p. 10).

While our Book of Common Prayer received unanimous approval some 55 years ago, times have changed.

One cannot read Rabbi Lord Jonathan Sacks’ Not in God’s Name, or listen to his re ections with [former Archbishop of Canterbury] Rowan Williams upon their visit to Auschwitz in 2008, or read the article by the present Archbishop of Canterbury regarding anti-Semitism, in which he says “We must stand together” with our Jewish sisters and brothers, and not be concerned that this prayer is, at the least, inappropriate. At the worst, it suggests anti-Semitism in these times when so much is being attempted to bring communities of faith together for the love of God and for justice in a broken world.

While the House of Bishops may be like that “other place,” the chamber of “sober second thought,” I would hope the small percentage of that house who voted against the discontinuing and removal of the prayer would not hinder the right and justi able change and that, even before 2022, an understanding can be made for the discontinuing use of that particular Good Friday prayer.

It would be my hope, as Bishop Michael Hawkins [diocese of Saskatchewan] suggested, the resolution not be “hidden” in housekeeping, and that the resolution by Bishop Bruce Myers [diocese of Quebec] will be unanimously approved, in God’s name, at the General Synod in 2019.

I have been an Anglican for over 80 years, including many years working for the church in parish and diocesan ministry.

After reading the article (Removal of prayer for conversion of the Jews to be revisited at General Synod, Jan. 2018, p. 10), I simply can’t get the issue out of my mind.

Diocese of Quebec Bishop Bruce Myers’ comments would seem to be precise in my view.  For the life of me, I cannot understand the position of some of our bishops.

I would have to say that I am ashamed of our church’s apparent attitude toward Jews.

Like the genocide of the Midianites by the Hebrew people, historians suggest the “slaughter of the innocents” by Herod very likely never happened (Not wholly innocent, by Canon Jeffrey Metcalfe, anglicanjournal.com, Jan. 11, 2018).

That offers some solace for those disturbed by the ethical implications of the stories, but it raises other questions, too: Why did the writers tell their story this way? How do fictional atrocities contribute to the writers’ theological purpose?

Get rid of pews

It’s worth pointing out that most of the tips (Tips for making your church dementia-friendly, anglicanjournal.com, Jan. 15, 2018) don’t just make things easier for seniors, but also for newcomers.

I might suggest further that church accessibility can be improved by eliminating pews, and having seating available only for people who need it.

I recently visited an Eastern Orthodox church that had moved all its nice old pews to the edges of the room, and had chairs or cushions available for those who wanted them.

I was stunned at how it allowed everyone to move more freely in worship, particularly anyone in a wheelchair. Teens could fulfill their rebellious streak by sitting on the floor. It also turns out that it’s what everyone did before the 15th century anyway, so traditionalists should have no grounds to protest.

Vestments add to ‘holiness’ of worship, except the chasuble

I had to shudder when I read John Longhurst’s article Anglicans or aliens? [Jan. 2018, p. 3] in which he stated that vestments may make people wearing them look “alien and disconnected from modern-day life.”

Those who lead the services at our Anglican churches (priest, deacon or lay reader) have been called by God.

says: “I have set you apart from all other people,” and that is what our vestments do.

Yes, vestments should be worn by those who have dedicated them- selves to God and his work. To me, a surplice and a cassock, or an alb, add to the “holiness” of our worship, and we should be worshipping God in the spirit of holiness.

On the other hand, a chasuble is far too pretentious and only says: “Look at how good Iam!” “Iam a big shot!” Let’s put all our clergy on the same level—get rid of the chasuble—humble yourself before the Lord.