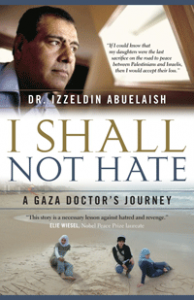 I Shall Not Hate: A Gaza Doctor’s Journey by Dr. Izzeldin Abuelaish

Dr. Abuelaish’s life, as a Palestinian born in a refugee camp who became a doctor and worked in both Gaza and Israeli hospitals, was already a remarkable story, but its deep tragedy caught the world’s attention. In 2009, two Israeli rockets hit his home, killing three of his eight children-his daughters Bessan, Aya and Mayar, along with his niece Noor. As the title of his book indicates, his response-deciding not to give in to hate but to work for peace in honour of his daughters-was powerfully moving.

“I know that what I have lost, what was taken from me, will never come back. But as a physician and a Muslim of deep faith, I need to move forward to the light, motivated by the spirits of those I lost. I need to bring them justice,” he wrote. “If I could know that my daughters were the last sacrifice on the road to peace between Palestinians and Israelis, then I would accept their loss.” 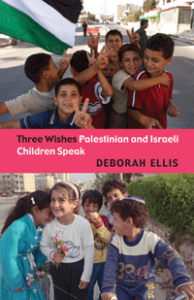 Ellis has never subscribed to the old adage that children should be seen and not heard. She has travelled the world interviewing children, particularly in conflict zones such as Afghanistan and Iraq, and more recently in aboriginal communities across North America, making sure that their voices and stories are heard. Controversial when it was published in 2004, Three Wishes seems sadly current today. Both Israeli and Palestinian children talk about the effects of the ongoing conflict in their daily lives-fear of bombs, fear of soldiers, hate, humiliations and injustices, pride in the resilience of their own peoples, not playing with or knowing children on the other side, wishes for peace, wishes that things could be different. It’s tough but revealing reading. 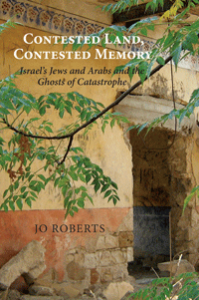 Contested Land, Contested Memory: Israel’s Jews and Arabs and the Ghosts of Catastrophe by Jo Roberts

In the introduction to her book, Roberts, a lawyer, anthropologist and journalis who has volunteered as human rights observer in the West Bank, writes that “[two] devastating events, the Holocaust and the Nakba, marked Israel’s founding, and how each has been remembered and forgotten has infused both the political and physical landscape of the country.” Though she says she does not equate the uprooting of 700,000 Palestinian people who became refugees in 1948 to the Holocaust’s genocide of six million, part of her motivation for writing the book was her recognition of “how vital an element in reconciliation and healing is the acknowledgement of another’s pain.”

Though there is an impulse on both sides to deny the other’s history and pain, Robert’s writes that the war of 1948 created “a radical imbalance of power” that enabled Israel to rename streets and places, plant forests over ruins, erasing or covering over traces of centuries of Arab presence in the land, but she also writes of Jewish Israelis who are making personal or political efforts to recognize that history and the Nakba. “The land of Israel/Palestine is small, and for a brokered peace to stabilize and hold there must be some degree of reconciliation between the two peoples, whether they live together in one state or side-by-side in two. Opening oneself to the Other’s story, and to the possibility that it may transform one’s own story, is an essential step toward reconciliation.” 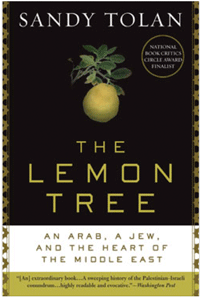 The Lemon Tree: An Arab, A Jew and the Heart of the Middle East by Sandy Tolan

Veteran journalist Tolan begins his acclaimed book with an account of three young Palestinian men visiting the village that they grew up in shortly after the 1967 Six-Day War. Their families had been driven out 20 years before and their village was now part of Jewish Israel. When they asked to see their childhood homes, one had a door slammed in his face, and the second found that his home had been converted into a school. When the third, Bashir Al-Khairi, knocked on the door, a young woman named Dahlia, who had arrived as an infant in Israel in 1948 with her family from Bulgaria, opened the door and invited the young men in.

“This poignant encounter is the starting point for a true story of a remarkable relationship between two families, one Arab, one Jewish, amid the fraught modern history of the region,” according to Tolan’s website. “What began with a simple act of faith between two young people grew into a dialogue of four decades that represents the region’s hope for peace and self-determination. The Lemon Tree is a reminder of all that is at stake, and of all that is still possible.” 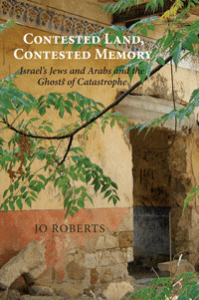 From Beirut to Jerusalem by Thomas Friedman

Investigative journalist Seymour Hersh summed up what became a recurring theme of reviews published about this intense, illuminating tome by saying, “If you’re only going to read one book on the Middle East, this is it.”

Friedman, who later became a Pulitzer-prize winning columnist for The New York Times, drew material from his stint as a reporter for (the now defunct) UPI and The New York Times, covering Beirut from 1979 to 1989. Historical events (in particular, the Lebanese Civil War and the First Intifada) come alive with sharp analysis and powerful anecdotes that give readers a firm grip of the political psychology of the Middle East. The book won the 1989 National Book Award for non-fiction.

With files from Marites N. Sison

Leigh Anne Williams joined the Anglican Journal in 2008 as a part-time staff writer. She also works as the Canadian correspondent for Publishers Weekly, a New York-based trade magazine for the book publishing. Prior to this, Williams worked as a reporter for the Canadian bureau of TIME Magazine, news editor of Quill & Quire, and a copy editor at The Halifax Herald, The Globe and Mail and The Bay Street Bull.