In the mid-20th century many Anglican Church of Canada parishes joined their mainline and evangelical neighbours in creating tightly-focused programs for even the tiniest demographics. Now, many parishes are tearing down those walls between ages and stages, hoping to bind up scattered, sometimes shattering church communities.

The 20th century craze to split the church into demographic segments was a profound departure from Judeo-Christian tradition. Jesus grew up in a Jewish community where the generations nurtured each other’s faith – in fact, young Jesus was so caught up learning from his elders at the temple in Jerusalem that he let Mary and Joseph start for home without him. The Apostle Paul mentored his spiritual son, Timothy, in ministry; he also instructed older men and women to be good examples and to mentor younger people in faith.

Sadly, segmentation – intended to keep kids, youth, young adults, or even seniors in church – may cut off them off from each other and the worshiping life of the church. This leaves youth with “no sense of what it means to be a mature adult Christian living out a life of faith in the Church,” writes the Rev. Valerie Michaelson, pastoral associate and Queen’s Chaplain at St. James’ Anglican Church, Kingston, Ont., in “How to Nurture Intergenerational Community in Your Church,” posted on the Wycliffe College Institute of Evangelism website. It also deprives adults and seniors the opportunity to understand and mentor younger members of the church, say advocates of intergenerational ministry.

Crosswalk, an intentionally intergenerational book club at St. Augustine’s Church in Lethbridge, Alta. was launched in early 2015. It offers informal mentoring and support to about 20 women and girls, ranging in age from 12 to their late 80s. “This group is intergenerational on purpose. We had youth, older ladies in the Anglican Church Women (ACW), and some women in friendship groups or who served at funerals, but we needed to build a bridge between generations and let them get to know each other in an unstructured mentoring setting, “says Wendy Doherty, Children and Families Coordinator, at St. Augustine’s Church.

“What I really like about Crosswalk is that it is intergenerational and age is no boundary. I am able to learn from older women, to have some influence on younger teens, and hear all their opinions,” says Meredith Macdonald, a health care worker who looks forward to Crosswalk even when she’s had a busy day at work. “The dynamics of the group are really interesting, and there’s so much knowledge in one room. I really like it that can ask questions without feeling belittled.”

The Rev. Allison Chubb, a chaplain at St. John’s College at the University of Manitoba, echoes the sentiment. “Sometimes, generations are hugely separate. Many people in the 18-22 age group genuinely don’t feel welcome in our churches, and most people don’t realize that.” 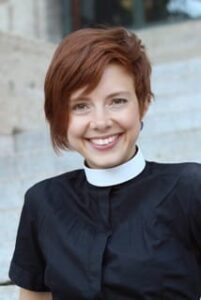 Chubb adds that just getting to church is an issue for many students she works with. “The University of Manitoba is almost situated outside the city, so it’s not always accessible to buses or getting to a church. I am trying to bring more people from the diocese in to the university,” says Chubb, adding that getting youth to participate in activities with members of her diocese, Rupert’s Land can be an uphill battle.

Chubb, believes that many youth engage best in what theologian Robert Webber called ancient-future worship: using ancient forms of worship in a modern context to create a sense of rootedness in the worshipper.

“Generally I find students are not connecting with a denomination. They’re looking for a community. They want a rootedness, a sense of the ancient, and the space to ask questions in that community,” says Chubb.

Tearing down walls between the generations can build community, strengthen faith, and remind both young and old that they are not alone, say advocates of intergenerational ministry.

The best news? Being intentionally intergenerational can begin with small changes: encouraging children and youth to participate in Sunday morning services, intergenerational prayer, an intergenerational worship service; or even just inviting seniors to share their faith with kids, teens, and young adults over dinner.