Children love Christmas, so it’s hardly surprising that there’s a wealth of Christmas books for kids. We all know the classics: the perennially popular Visit from St. Nicholas (“ ’Twas the Night Before Christmas”), which first appeared in 1823; and of course, Charles Dickens’s A Christmas Carol (1843) has long been a favourite for young and old. More recently, books like Dr. Seuss’s How the Grinch Stole Christmas!, published in 1957, or Chris Van Allsburg’s 1985 Polar Express seem on their way to joining the list of established favourites. Meanwhile, authors and illustrators are continuing to rework Christmas as a theme for children’s books. Here’s a sampling of offerings: 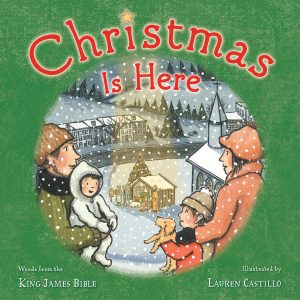 Christmas Is Here (Simon & Schuster, 2010) retells the story of Christmas through the eyes of a young boy going to watch a re-enacted nativity scene outdoors on a snowy Christmas Eve. A glimpse of the baby in the manger and verses from the Bible recounting the story of the first Christmas spur the boy’s imagination, and he is taken back to ancient Bethlehem, where he sees the shepherds, angel, stable and holy family. Illustrations by Lauren Castillo lend a childlike innocence both to the boy’s outing with his family and the Bethlehem scene. There’s no text beyond the biblical passage, but the book doesn’t seem to suffer for it, and parents are likely to enjoy explaining their way through the book. 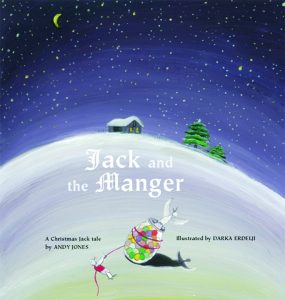 Jack and the Manger, published in 2010 by Running the Goat Books & Broadsides, is a children’s Christmas book with a Newfoundland accent. Written by Andy Jones, whom Canadians may remember from the CODCO television comedy series, the book retells the nativity story, with some o -the-wall di erences. In addition to Jesus, Mary, Joseph and the other characters from the gospel, this one includes Jack, a quintessential Newfoundlander. e story is narrated as though it were a Newfoundland folk tale, with all the particularities of local speech and lore. Illustrations, by Slovenian-born Darka Erdelji, are especially memorable; they bring a child’s open-eyed sense of wonder to this quirky retelling.

The words to the uniquely Canadian “Huron Carol,” which is set to a traditional French tune, were originally written in the Huron language, probably by Jesuit missionary Father Jean de Brébeuf, around 1641. In 1926, writer Jesse Edgar Middleton wrote an English version in which the nativity story actually takes place among the Huron people. At least two children’s books dealing with this classic carol have been published in recent years. 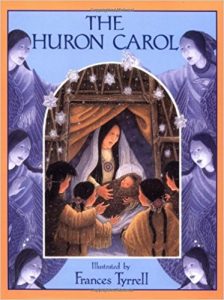 The Huron Carol (Groundwood Books, 2006) features the Middleton version, with illustrations, each spread over two pages, by artist Ian Wallace for every line of text. Wallace’s pictures are imaginative and beautiful, and mirror the carol’s Indigenous-themed Christian spirituality. There is sheet music at the back of the book, plus Huron and French words to the carol’s first verse. 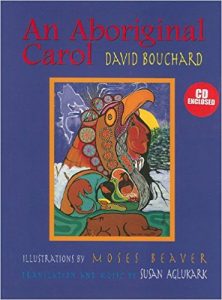 An Aboriginal Carol, published in 2008 by Red Deer Press, is the result of a collaboration among Métis writer David Bouchard, Aboriginal artist Moses Beaver and Inuit singer Susan Aglukark. Bouchard reworks Middleton’s version, expanding its Indigenous themes; in this account, the baby, found in “a lone abandoned tipi” is Deganawideh, the Peacemaker, who is, according to one First Nations tradition, the reincarnation of Christ. A translation of Bouchard’s lyrics into Inuktitut, by Aglukark, accompanies the text, and a CD that comes with the text features a performance of the song by Aglukark. Beaver’s paintings, where animal and human forms seem to morph into one another, evoke a winter night in which nature seems full of spirit. 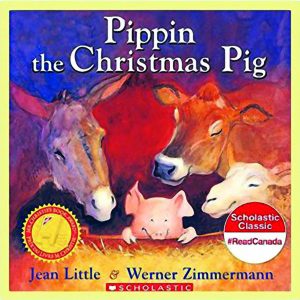 Pippin the Christmas Pig (Scholastic Canada, 2003) is a touching Christmas-themed fable about how an under-appreciated pig comes to bring her fellow barnyard animals to a deeper understanding of Christmas. Noddy is made to feel that all the other animals played a role in the Christmas story, except for pigs. Dejected, she goes for a walk in the blizzard—and returns with some very special guests. e cute but meaningful story, written by veteran Canadian children’s author Jean Little, is likely to spur children to reflection, and Werner Zimmermann’s illustrations make you feel the snug coziness of an old-style barn and the chilly swirl of a snowstorm. Pippin the Christmas Pig, which the publisher recommends for children ages four to eight, is the most text-heavy book in this sampling. 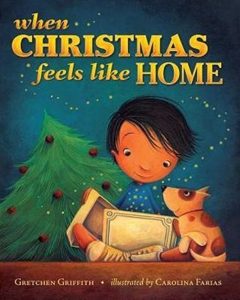 When Christmas Feels Like Home (Albert Whitman & Company, 2013) tells the story of how Eduardo, a little Mexican boy who moves to the United States with his family, comes gradually to accept his new home. Bit by bit, Eduardo, who arrives in the summer, gets accustomed to American ways, all the while looking forward to Christmas. When it arrives, he assembles a nativity scene from pieces he had carved in Mexico with his grandfather, and finally feels at home. The heartwarming story, which includes occasional words and phrases in Spanish, was written by Gretchen Griffith; endearing illustrations are by Carolina Farias.