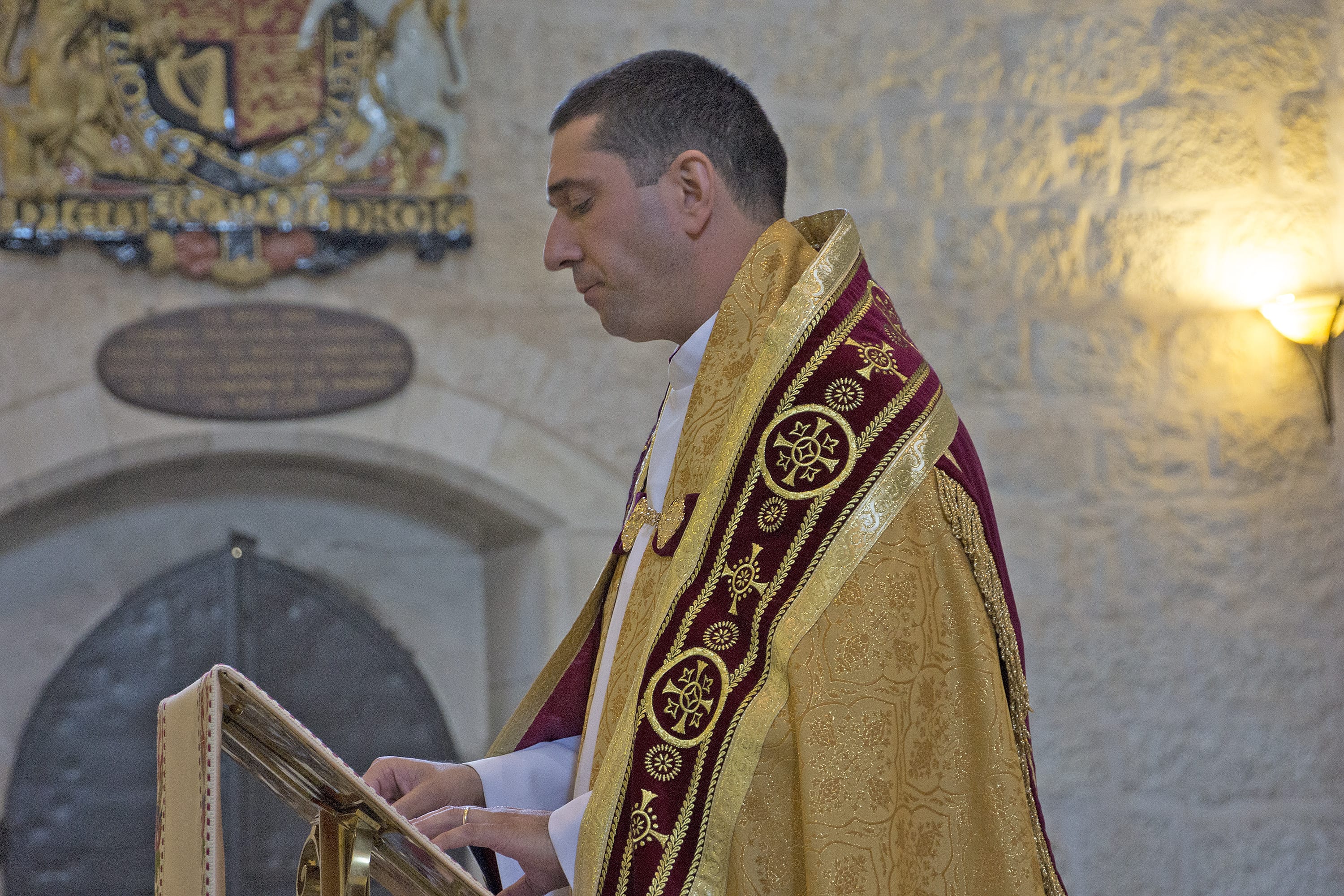 Canon Hosam Elias Naoum, the new dean at St. George’s Anglican Cathedral in Jerusalem, is a Palestinian Christian who has served the congregation since 2005. Photo: Vianney Carriere

This Pentecost Sunday, May 27, Anglican and Lutheran leaders in the Holy Land will issue a joint pastoral letter informing their churches that they are fully committed to establishing closer relations, and in time, full communion.

The letter was a result of a meeting held in Jerusalem May 15 to 21 in which national leaders of the Anglican Church of Canada and the Evangelical Lutheran Church in Canada (ELCIC) were invited to share their journey into full communion.

“It was really quite historic that a country where churches are in full communion were invited to come and share their story in another context,” Archbishop Fred Hiltz, primate of the Anglican Church of Canada, said in an interview. Canadian Anglicans and Lutherans have been in full communion since 2001. This allows Anglicans and Lutherans to freely worship and take communion in one another’s churches. They also can share resources and their priests may officiate at one another’s services.

Hiltz quoted Bishop Munib Younan of the Evangelical Lutheran Church in Jordan and the Holy Land as having said in the meeting that his church and the Episcopal diocese of Jerusalem are “getting together through Canada.”

Driving the push towards full communion is the fact the Christian population is diminishing in the birthplace of Christianity, said the primate. “A more unified witness on the part of the church in the Holy Land is absolutely critical to the survival of the church (there),” he told the Journal. “Anything that you can do in the Holy Land that shows that churches are working together is a very good thing. It’s a good thing theologically, pastorally and politically.”

The Christian population within Jerusalem has dropped from 19% or about 32,000 in 1946 to 1.9% or about 15,000 in 2011. Several factors have contributed to the decline, among them, Arab-Israeli conflict in the Middle East and lack of economic opportunities.

The Archbishop of Canterbury Rowan Williams and Lutheran leaders first expressed the desire for closer Anglican-Lutheran relations in the Holy Land during the Lutheran World Assembly at Stuttgart, Germany, in 2010, said Hiltz. Progress came at last year’s meeting in Jerusalem of the Anglican Lutheran International Commission. At that meeting, Younan and Bishop Suheil Dawani, bishop of the Episcopal diocese of Jerusalem, spoke about the experiences of their respective churches. Hiltz said he felt moved to offer Canadian support so the two Holy Land churches could work more closely together.

The result was this year’s meeting, which included ELCIC national bishop Susan Johnson, the co-chairs of the Joint Anglican Lutheran Commission (Anglican Dean Peter Wall and Lutheran Bishop Michael Pryse), and other Anglican Lutheran and Anglican leaders in the Holy Land. Also present was the Anglican Church of Canada’s Director of Resources for Mission and Communications and Information Resources Vianney (Sam) Carriere.

Dawani and Younan spoke about the history and current state of relations between their churches and expressed their hopes and expectations for full communion. Hiltz pointed out that the first bishop of the Episcopal diocese of Jerusalem (1841), Michael Solomon Alexander, served both Anglicans and Lutherans.

The Canadian delegation spoke about the journey that led to full communion. It took almost 30 years. “We didn’t hesitate to say it wasn’t a smooth journey, that we had challenging questions,” said Hiltz. They also went through each section of the Waterloo Declaration of full communion between the Canadian Anglican and Lutheran churches and spoke about how their churches are living out the commitments outlined there.

“We weren’t there to tell them how to do it, said Hiltz. “It’s up to them, in their own context,” to decide the next steps. “There’s the history, the political situation, the issue around working towards just and lasting peace and a huge commitment to ministries that benefit Christians, Jews and Muslims,” said Hiltz.

The Episcopal diocese of Jerusalem has ministries in Jerusalem, Jordan, Palestine, Israel, Syria and Lebanon. The Evangelical Lutheran Church in Jordan has congregations in Jerusalem, Bethlehem, Beit Jala, Beit Sahour, and Ramallah, and in Amman.

While in Jerusalem, the Canadian delegation joined other religious leaders for the installation of Canon Hosam Elias Naoum as the new dean at St. George’s Anglican Cathedral in Jerusalem. Naoum, 38, is a Palestinian Christian who has served as canon pastor for the cathedral’s Arabic- and English-speaking congregations since 2005.

He is the first non-English to serve in the position. “There’s great excitement in the diocese about his appointment,” said Hiltz, who preached at the installation service. Naoum is committed to helping raise the cathedral’s profile in the Anglican Communion, he noted. “As Bishop Suheil said, there are two great cathedrals in the world: in Canterbury and in Jerusalem.”