From the Primate: Lament and mourn today—and seek change tomorrow

Sometimes there is a certain Canadian smugness expressed when we see the dire situation of our neighbour to the south. We shake our heads and express dismay at the level of racial violence that periodically emerges there while feeling a sense of relief that, of course, this does not happen in Canada.

But it does. We have seen violence against racial communities in Canada in anti-Muslim terrorist acts; anti-Semitic vandalism and desecrations; missing and murdered Indigenous women and girls; and disproportionate deaths of people of colour. Despite our desire to wave the flag of multiculturalism and be glad that the Underground Railroad brought Harriet Tubman to Canada, racism is embedded in our social structures, in our relationships, in ourselves.

Evangelical Lutheran Church in Canada National Bishop Susan Johnson and I have invited Anglicans and Lutherans to join the Day of Lament and Mourning on June 1 being held in the United States, shared by Lutherans and Anglicans there. In the face of the death of George Floyd—another black man killed by police brutality—the long-simmering grief and rage at embedded racism has spilled over into night after night of protests and violence. This is not only about George Floyd. This is about hundreds of years of racist brutality, inequity and fear that has not been heard or, if heard, has been papered over by Band-Aid solutions. The hard, hard work of uprooting racism takes the desire and concerted efforts of generations of people. The roots of racism are deep, pernicious and constantly renewing.

Last year, in the months before General Synod and the primatial election, an acquaintance told me that she had heard someone publicly share that I am racist. My initial response was to be deeply hurt and to try to find out what I had said or done that would lead to those remarks. How had I acted? What had I said? How could this be when I abhor the thought of racism?

Since then I have recognized that I am racist. I am a white, privileged Canadian who is enmeshed in the cultural expectations and assumptions of the society in which I was raised. I have benefitted because I was born into the class and colour of those who have systemic power. As someone with power I unconsciously participate in and collude with racism and have absorbed attitudes deep within me. I am as enmeshed in racism by the benefits I have received as is the person enmeshed in racism by discrimination. The only aspect of disempowerment I have experienced directly has come from my gender as a woman. Even there, others had begun the battle for rights and recognition over the past one hundred years, and I enjoy the fruit of their hard-won justice.

For several years I have been learning. I am deeply grateful to the Indigenous people in the diocese of Huron, especially in LAIC (Lenni Lenape Algonkian Iroquoian Council), and people like Archbishop Mark MacDonald, Melanie Delva, Martha Many Grey Horses and Dr. Ginny Doctor, who gently but firmly persist in challenging racism in our midst with their words and actions and are teaching me. I have had to examine my heart, mind and attitudes in new ways. I have needed the voices of Ibram Kendi, author of How to Be an Antiracist, Robin DiAngelo’s book White Fragility and Episcopal Church Presiding Bishop Michael Curry to help me take steps on what will be a lifelong journey to deprogram assumptions and recognize racism when I see it in myself and in policies and cultural norms around me.

As a church, we began a long journey to address the racism that was firmly entrenched in residential schools, but there is much, much more to do. We are slowly learning and receiving the gifts Indigenous people and their spirituality bring to our shared faith. Recently I met with the leadership of Black Anglicans in Canada to discuss the issues they face within our church. Our leadership as a church does not represent the diversity of our parishioners. Our councils, synods and General Synod do not yet show the diversity of cultures and people who share in our baptismal covenant. If these bodies are to be representative of the gifts in our pews, this needs to change.

The Council of General Synod has, with me, committed to helping our church address racism. General Synod passed a Charter for Racial Justice in 2004 with the intention to deepen anti-racism work in the future. Some dioceses have picked up this work with specific anti-racism training. We want to continue and strengthen that commitment across the church and in all our councils and committees.

This is not optional work. It is at the core of our baptismal covenant to love neighbour as self and to respect the dignity of every human being. It demands our attention as a church and as a society. When we persistently ignore the cries of those who are denied dignity and equality, we cannot be surprised by the resulting anger and frustration finally finding an outlet in the violence now seen. We must always stand for peace, but only if we also stand for action and a willingness to listen to those disenfranchised and powerless who cry out for justice.

“For everything there is a season…” (Ecclesiastes 3:1). Today is the day for mourning and lament. Tomorrow—and every day after—must be a day for change. 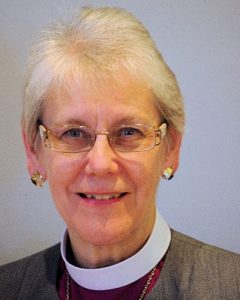 Archbishop Linda Nicholls is primate of the Anglican Church of Canada.