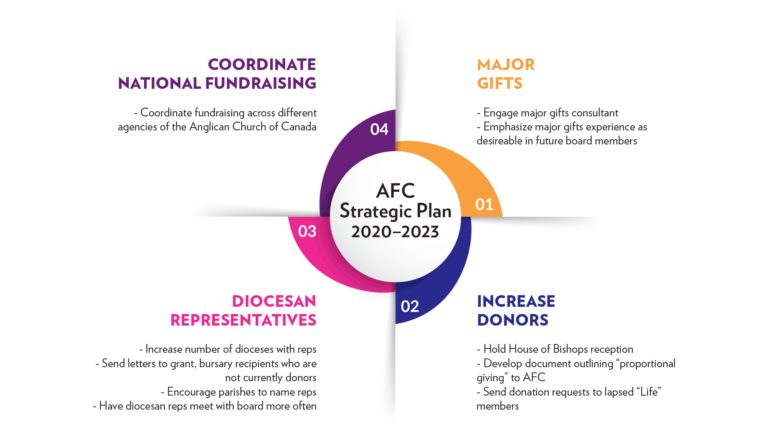 General Synod isn’t the only body in the Anglican Church of Canada to consider strategic planning of late. The Anglican Foundation of Canada (AFC) recently approved a four-pronged strategy for boosting its fundraising in order to continue operating and providing financial assistance at its current levels.

This May, the AFC approved a new strategic plan for the years 2020-2023—one to replace its most recent roadmap, which had covered 2017-2020. The new plan continues many of the priorities of the previous one—especially the old plan’s third goal, enhancing philanthropy.

The new plan focuses on fundraising, the planning document explains, as a means of increasing revenues used to pay for the foundation’s annual operating budget and grants. In recent years, AFC has closed funding gaps with money from bequests and reserves, but the organization is aiming for a more sustainable approach.

“AFC needs to have a focussed fundraising strategy with achievable annual targets to ensure we do not rely on unpredictable bequests and/or draw down our assets,” it states.

The new plan was spearheaded by Brian Cameron, a member of St. John the Evangelist Anglican Church in Ottawa and—until he retired this May—chair of the AFC’s strategy committee.

“We do have a fairly large fund that’s been built up over the years, but most of it we want to keep in place—we can draw on the interest, but we don’t want to have to go in and draw down our capital,” Cameron says. “We’ve been lucky in the last couple of years [with the bequest] … But we can’t rely on that kind of thing. So this plan looks at how we can fund our operating costs and our annual grant cycle from donations from contributions from parishes from individuals, major gifts.”

In tackling this challenge, he says, the plan also addresses other factors that are closely tied into it, such as raising Canadian Anglicans’ level of awareness of the foundation and increasing its membership.

“The issue that was facing us, and is still facing us to a large extent, is that people see the Anglican Foundation as this large pot of money sitting in Toronto that’s available when parishes need some serious work done on their infrastructure—a new roof, a new boiler, you know, a whole host of things. But there hasn’t been the recognition that we can only do that if we expand our base of donors, and that there’s a sort of mutual obligation on the part of parishes and dioceses to pitch in and be part of what we’re doing.”

One area the AFC wants to prioritize in the coming years, Cameron says, is its ability to attract large donations. Hence, the first of the four elements in the new strategy—which aren’t, he says, numbered in order of importance—is concerned with major gifts. It calls for hiring a consultant to develop a major gifts strategy, and to include experience in soliciting large donations as a desirable attribute in future board members.

The foundation has already accomplished the first of these priorities. In January 2020, it brought on Peter Wall, retired dean of Niagara and a past vice-chair of the foundation’s board, as gift consultant, on an initial one-year contract. Along with seeking such gifts, Wall has been engaged in related tasks, including working to get the foundation’s message out via its network of representatives in the dioceses and writing a blog for the AFC about generosity.

The COVID-19 pandemic, the planning document notes, has made fundraising of all kinds more challenging—and this, Cameron says, is especially true of the plan’s first goal.

“We’re facing more of a challenge than we expected from the point of view of major gifts, because, of course, with COVID-19 people are alarmed, obviously, and they’re facing financial challenges. Those who have more money than others are looking at what’s happening to their investments and wondering when they’re going to recover, how long that’s going to take.”

At the same time, the document suggests one longer-term outcome of the pandemic may be to actually increase giving by church members, if the experience of missing worship during the temporary suspension of services makes them value their church communities all the more.

A survey the foundation performed at the 2019 General Synod, Cameron says, suggested that there’s considerable potential to increase the number of donors, and thus a second goal of the plan is an annual five-per-cent increase in the number of individuals and parishes that contribute. The plan sets out a number of means of reaching this goal, including holding a reception at House of Bishops meetings once in-person meetings resume, and instituting, instead of the current $50 minimum contribution required for membership, a system of “proportional giving” in which recommended contributions vary according to the size of a parish’s operating income.

The foundation also believes it can convince all the Anglican Church of Canada’s bishops to become members, he adds, and expects to be contacting them individually about the importance of the AFC’s work.

The fourth goal, he says, is longer-term: a coordination of fundraising efforts on the national level of the church and with AFC and PWRDF (Primate’s World Relief and Development Fund).

Complicating fundraising in the Anglican Church of Canada, the plan states, is the fact that Canadian Anglicans are asked to donate by several national sources at various times of the year. General Synod’s Resources for Mission department has its annual Giving with Grace campaign; the Anglican Journal has its own annual appeal; and the AFC and PWRDF appeal to donors in various ways. These appeals create the impression that the field is crowded with competing players, rather than bodies whose ministry is mutually complementary, the plan states.

Instead, it continues, AFC is very willing to have a conversation about collaboration in fundraising, drawing on a theology of abundance, not scarcity. The idea, Cameron says, is that having all these efforts fall under a single planning process would be more conducive to hope, rather than anxiety, among Canadian Anglican givers.

Wall, he adds, has begun speaking with Archbishop Linda Nicholls, primate of the Anglican Church of Canada, on working toward this more coordinated approach.

Cameron says that despite the heightened element of unpredictability that the COVID-19 pandemic has brought, it remains important for the AFC to plan beyond the immediate future.

“We always recognize that things will change over the three-year period, but if you don’t have that three-year vision in place, you’re kind of lurching from one thing to the next,” he says. If you’ve put a lot of thought into … the longer-term things that need to be done, you’re going to be in a much better position to focus on the essentials when you have to make decisions. And when you do have to make important decisions, you refer back to the plan and ask, ‘Is this in line with the values we put forward in the plan? If not, has enough changed that we need to adjust it?’

“I think it’s really important to have those goalposts in place, and in mind, at all times.”