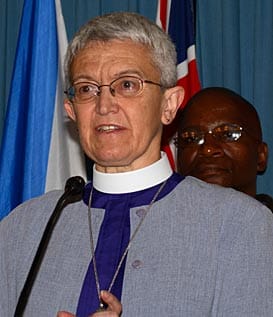 Canada’s reputation as a human rights leader is being damaged by environmental and human rights abuses of Canadian mining companies overseas, say church leaders and activists from the Philippines and South Africa.

She was speaking at a news conference on Parliament Hill May 29 as part of a delegation of church leaders and activists who want the federal government to adopt recommendations made in a federal roundtable report, released in March, on the global impact of Canadian mining operations. An advisory group representing Canadian mining companies and civil society groups prepared the report.

Bishop Moxley, who visited Cerro De San Pedro in Mexico in 2005 as part of a church leaders delegation organized by Kairos, said she was shocked by the environmental impact on the people. “It was caused by Metallica Resources, a Canadian company headquartered in Toronto,” she said. “Canada’s reputation as a country with respect to human rights is being damaged because of companies like Metallica.”

She added, “When I saw graffiti on walls that said, ‘foreigners go home’ – and I knew it was directed at me – at Canadians, my heart sank.”

Kairos (an ecumenical coalition focused on eco-justice issues) says Metallica has ignored Mexican court decisions that have consistently come down in favour of the community of Cerro De San Pedro.

The delegation urged the government to act on the roundtable report’s recommendations without delay. The news conference was held as part of the national “Dirty Waters” tour involving Kairos partners aimed at raising public awareness about the impact of Canadian mining operations overseas.

Art Babych is editor of Crosstalk, the newspaper of the diocese of Ottawa.