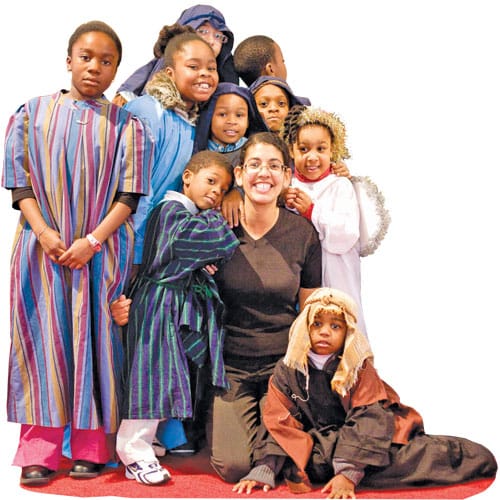 Reason for the season: Tapping into moments of joy and goodwill. Photo: Michael Hudson

In this secular and multi-faith society, Christmas past and present still resonates deeply with Canadians. My proudest hour as a child was playing Magus Melchior in the Sunday school pageant, wearing my grandmother’s velvet “evening turban” from the 1930s and carrying my “myrrh”-mother’s pointy, bronze incense burner.

And over the years, I’ve been fortunate to experience a few of what I call quintessential Christmas moments, when the force and power of that long-ago but ever-new event stand out in crystal clarity.

A few years ago, I was making a late start on my shopping on a drizzly Toronto afternoon in mid-December, dashing in and out of posh stores and buying rashly and resentfully. By chance, I dropped into the Anglican Church of the Redeemer, where a full-costume rehearsal was in progress for a concert of Italian Renaissance Christmas music-exquisite and, to me, unfamiliar pieces that enthralled me for an hour. When I emerged, darkness had fallen and the grey city was miraculously covered in a blanket of fresh snow.

Elated by the music and then the snow, I was overcome with a feeling I can only describe as reverence. I pressed a handful of bills under the sleeping bag of a homeless man huddled on a grate nearby. I went my way, thinking: “If you do nothing else this season, you have had a true Christmas experience.”

Christmas means many things to many people. To the man on the grate and others like him, it may mean a time when people are more generous and mindful of the needs of others. To the lover of music, it may mean the performance of sacred works that thrill Christians and non-Christians alike.

The Anglican Journal spoke with people across Canada to find out what the season means to them and to tap into their recollections of moments when they felt touched by the joy and goodwill that define the spirit of this holy time. Here’s what they told us.

For Keith Boeckner, people’s warden for the Cathedral of the Holy Trinity in Quebec City, the highlight of the season is always the late-evening service on Christmas Eve, which in Quebec City usually involves deep snow.

Keith was raised in the Lutheran Church and he recalls celebrating Christmas in small Ontario towns with his maternal and paternal grandparents, all of whom were of German descent. A horse-drawn sled would meet them at the road to take them into his grandfather’s farm, and often they would head off to their rural church in a one-horse sleigh. “We always set up a creche at home,” he says.

His family celebrated on Christmas Eve, exchanging gifts after the candlelight service.

Beverley Whitehouse of Whitehorse, Yukon, remembers the 11.00 p.m. Christmas Eve service from her early childhood as the most powerful symbol of the season. But one December about seven years ago, she had a life-altering spiritual experience. “I was having a very hard time at that point in my life,” she recalls. “I was on a bus crossing the bridge over the Yukon River and on the other side there was a huge sign saying, ‘Christ is the reason for the season.’ ”

The truth of those words hit home. “I thought to myself, ‘Christ is also the reason I’m alive.’ I had been a lifelong Anglican but had not yet dedicated my heart completely to Christ and his work,” she says. That was a pivotal point for Beverley, who is now a lay minister as well as secretary to the Parish of Whitehorse at Christ Church Cathedral.

Christmas is also a time when our awareness of and sympathies for others may be heightened. Sheila Boutilier, a retired nurse who attends St. Nicholas Church in east-end Toronto, recalls one year when she felt pained by the sharp contrast between the joy of attending Christmas Eve service, as is her custom, and the sadness of caring for critically ill patients in the hospital. “I was working that Christmas Eve and was so saddened by the patients, many of whom were so ill they were not aware of the season,” she says. “I couldn’t even wish them Merry Christmas.”

On a more uplifting note, Sheila recalls a modern footnote to the journey to Bethlehem. About five years ago, her then 20-year-old nephew, Jason Dunnet, was serving in the Royal Canadian Dragoons in Afghanistan. His squadron was carrying military equipment up a steep mountain path when they came across a farmer viciously abusing his donkey. “The boys all chipped in and bought the donkey for $100,” says Sheila. “Then they took the animal to an army medic, who announced that it was pregnant.” That donkey was pampered like a princess and eventually gave birth to a healthy foal.

Valma Parsons is a retired elementary school teacher in Spaniard’s Bay, a small former shipbuilding town (pop. 3,000), an hour’s drive from St. John’s. For Valma, a member of the Parish of Spaniard’s Bay and Tilton, Christmas revolves around religion and family. The Christmas that stands out most in her mind is quite recent, about four years ago. “I said to myself that year, ‘The one thing I really would love is for the whole family to go to Christmas Eve service together.’ ” And so it happened that her sons and daughters-in-law and her two-year-old grandson all came home for Christmas and went to church as a family.

“There were seven of us all together in the front pew, worshipping God. It was a wonderful feeling. I could feel the Holy Spirit. I was so full of joy, love, hope and peace that my heart was ready to explode,” says Valma.

As an added bonus, some of the students she had taught years before had also come home for the holiday and stopped to speak to her as they passed by the front row. “It was the best gift I could ever have,” she says.

Reverence, generosity and connectedness with our fellow human beings may be the cornerstones, but Christmas is also about revelry and good food. Steve Pitt, who trained to be a United Church minister, is now a writer of children’s books based in Bonfield, a tiny hamlet in northern Ontario. One Christmas in Toronto, his Sri Lankan in-laws won a huge 45-pound turkey, frozen rock-solid of course, and donated it for Steve’s annual dinner, always a celebration of Dickensian proportions.

“It wouldn’t fit in the fridge or the sink for thawing, so I decided to thaw it out in the car, which was the right temperature for thawing,” he says. “I put it in my son’s long-discarded car seat wrapped in a blanket, with a maple leaf toque stuck on top at a rakish angle and drove it around on my errands.”

As Steve emerged from the beer store with his supply of Christmas suds, an irate lady was waiting to upbraid him for leaving his child in the car while he bought alcohol. And it got worse. “Later, I was pulled over by a police officer checking for drinking drivers under the RIDE program. When he saw the outdated car seat, he wanted to write me up a ticket for using an obsolete model in the front seat!” I showed him the turkey, and all he could say was, ‘Move along.’ ” The bird, incidentally, thawed perfectly, though it had to go in the oven propped on its head and at 3 a.m. to be ready in time for dinner.

May your Christmas be a blend of reverence, joy, peace, merriment, generosity and connection with others. Ω