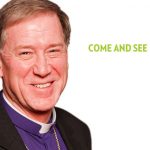 In November last year, I was in Amman, Jordan, for the Majma (synod) of the Episcopal Diocese of Jerusalem. While there, I had the privilege with other members of the advisory council of the Canadian Companions of that diocese to visit the beautifully preserved site of our Lord’s baptism. From the Jordanian side of the river, the walk to the water’s edge is a simple gravel path. The river itself is considerably shallower than it would have been at the time when John was preaching and baptizing.

On the west bank of the river in the Palestinian Territories, a number of people were being baptized, all of them surrounded by family and friends supporting them in their decision. One group was quite charismatic. They cheered and clapped as their kin and friends made their threefold immersion into the murky, brown water of this ancient river. Another group was much more quiet, prayerfully watching as a priest poured copious amounts of water in threefold fashion over the head of each one being baptized. Another group was joyfully singing that great old evangelical hymn “I Have Decided to Follow Jesus,” with its familiar refrain, “No turning back, no turning back!”

On the Jordanian side of the river where we were, a number of pilgrims were wading into the water, too. Some drew handfuls to their face, a sign of their yearning for renewal in the manner of life to which baptism calls us all. It was not long before I found myself among them… The water was cool and refreshing. I felt renewed. It was an experience that I will never forget.

As we celebrate the Baptism of Our Lord, we remember the Father’s delight in him and the Spirit’s resting upon him in the bodily form of a dove. We remember, too, his subsequent obedience to the Father’s will for the sake of our redemption. With humility, we “remember always that our baptism represents unto us our profession; which is, to follow our Saviour Christ, and to be made like unto him; that as he died and rose again for us, so should we…die from sin, and rise again unto righteousness, continually mortifying all evil desires, and daily increasing in all virtue and godliness of living” (Book of Common Prayer, p. 530).

In our endeavour to be faithful in this calling, let us pray for God’s grace, day by day.