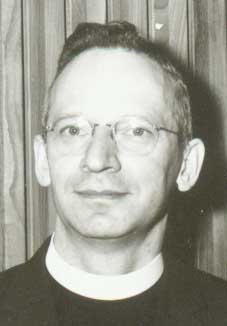 Canon Howard Buchner, an unassuming but towering figure at Toronto’s Trinity College where he served for many years as a professor and dean of the faculty of divinity, died May 27 at the age of 85.

Born July 6, 1921, Canon Buchner served in the Royal Canadian Air Force until 1943, when he decided to become a priest, graduating with a licentiate in theology from Trinity College in 1947. Upon his ordination in 1947, he became assistant curate at All Saints Cathedral, Edmonton, and in 1949 became a member of the mission team at Edson, Alta. He later attended the Berkeley Divinity School at the Yale University Divinity School, where he received a master of sacred theology in 1959.

In 1961, Canon Buchner became dean of the faculty of divinity at Trinity College from 1961 to 1983; he continued to teach until his retirement in 1987. He also served as honorary assistant of St. Martin-in-the-Fields, Toronto.

On Nov. 28, 1997, arts and divinity alumni, faculty, staff and friends gathered at the college to celebrate Canon Buchner’s 50th ordination to the priesthood. Canon Buchner had been known as “The Vicar of Edson” in his early days out West, but he was “often seen calling numbers at bingos in his red Trinity jacket,” wrote Trinity Alumni Magazine in its account of the anniversary celebration.

Canon Buchner also authored a number of books on music, among them, Music in the Parish Church, aimed at guiding clergy, organists and choir directors in their choice of liturgical music.