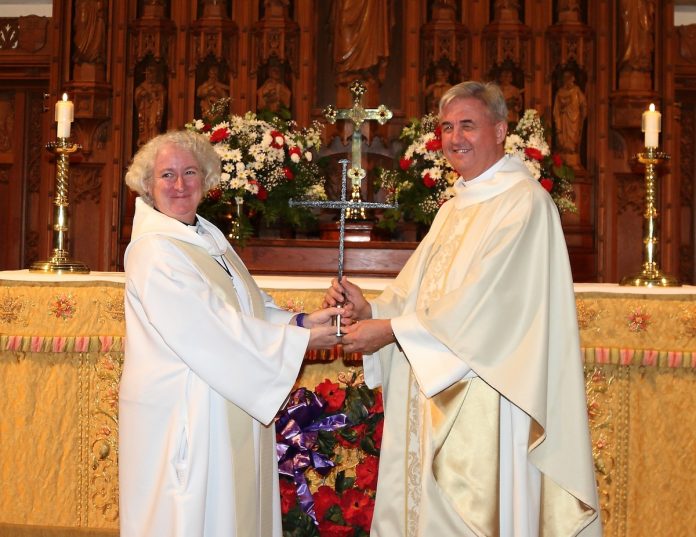 Two Anglican cathedrals in Ontario have joined the Community of the Cross of Nails (CCN),   a reconciliation ministry of the Church of England’s Coventry Cathedral.

Formed in 1974,  the community arose out of a commitment made by the former Provost of Coventry Cathedral, Richard Howard, “not to seek revenge, but to strive for forgiveness” following the destruction of Coventry Cathedral during the Second World War, according to the CCN website. Today, CCN has 220 active partners in more than 40 countries who are committed to a shared ministry of reconciliation.

Sarah Hills, Canon for Reconciliation at Coventry Cathedral, presented a Cross of Nails to the congregations of Christ Church Cathedral in Ottawa   and St. George’s Cathedral in Kingston at separate services November 5.

The cross represents three medieval roof nails removed from the rubble of St. Michael’s Cathedral in Coventry after it was destroyed by German bombs on the night of November 14, 1940. The Cross of Nails has since become “a powerful and inspirational symbol worldwide of reconciliation and peace,” according to the CCN.

At Christ Church Cathedral, Hills gave a sermon based on the work of CCN, led the liturgy for receiving of the Cross of Nails, which included the congregation’s affirmation of commitment to the ministry of reconciliation. Hills then presented the Cross of Nails to Shane Parker, dean of the cathedral, asking church members to “guard this cross as a symbol of your strength to work and pray for peace, justice and reconciliation, and live at peace with all people as far as it depends on you.”

The crosses were blessed at a Coventry Cathedral service before they were delivered to the cathedrals in Ottawa and Kingston.

The Cross of Nails at Christ Church is expected to be mounted in the east transept, where the church’s connection to the Anglican Military Ordinariate is recognized, and where its monthly healing ministry takes place. Parker has also announced that, effective November 5, the east transept is to be known as the Chapel of Reconciliation.

Later, in an interview with the Anglican Journal,  Hills said, “We are really invigorating the network in Canada and we’re really grateful to the Ottawa cathedral and Dean Shane Parker for renewing and reinvigorating this partnership.”

The network includes churches, schools, and Christian organizations “in areas in conflict or post-conflict places which need reconciliation work,” she said.

Hills also acknowledged the work of the cathedral in helping to bring about reconciliation with Indigenous peoples. “I’m hoping this network (CCN) will really help in that great work they’re doing already but also increase the reach of reconciliation post-TRC (Truth and Reconciliation Commission).”

Parker said the hope is that a Canadian branch, board or chapter of CCN could be formed. It could help to “strengthen the linkages in Canada for those who are working for peace and reconciliation and to strengthen our bonds through Coventry to the rest of the world, in a sense,” he said.

Although the concern in Canada at this time is with reconciliation with Indigenous peoples, Parker said reconciliation has a deeper foundation in the Christian tradition. “And for us to learn from the experience of others in the world in terms of approaching the long journey it sometimes takes to feel and realize reconciliation will, I think, be a helpful resource to us all.”

While in Ottawa, Hills spoke at the diocese of Ottawa synod November 3 and also had a lengthy discussion with the primate, Archbishop Fred Hiltz, who was guest speaker at the gathering. Parker reported that Hiltz was “very keen on the Community of the Cross of Nails.”

The cathedral service, held on the Feast of All Saints (Remembrance Sunday), also included an act of remembrance, with the reading out of the names of dozens of former cathedral parishioners who lost their lives in the two world wars and the Korean war. The Last Post, a lament and Reveille were also part of the program.

In 1979, Christ Church Cathedral Ottawa was formally designated the Cathedral of the Anglican Military Ordinariate of the Canadian Forces.