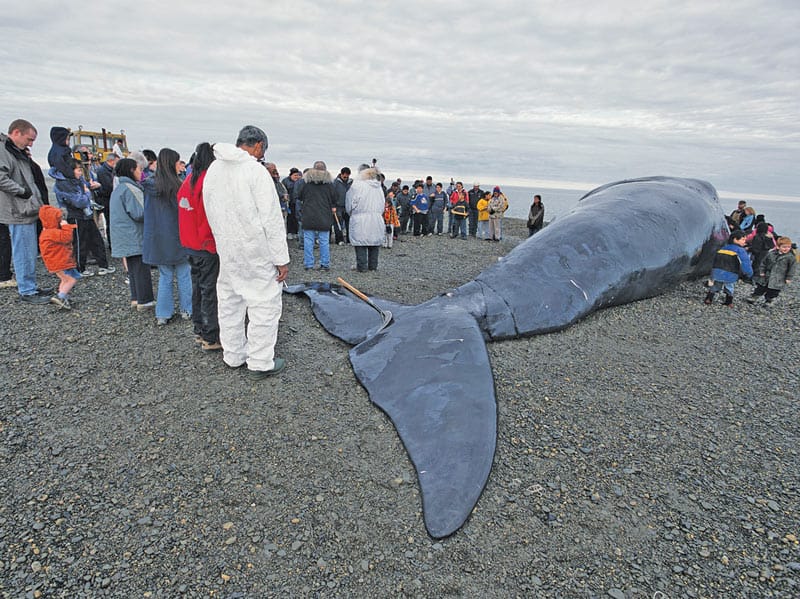 A once thriving coastal community on the Chukchi Sea is moved inland two miles because of flooding. A beloved grandmother drowns while crossing thin ice on a river that all her life was deeply frozen by October. Starving polar bears roam the streets of towns, hunting canine and human prey. No longer broken by tracts of ice, huge storm waves overwhelm a family of five in their boat. Islands and riverbanks erode. Lakes disappear. As the permafrost melts relentlessly, the ground collapses into sinkholes.

These are just some of the disturbing realities for the indigenous peoples of the Far North. And now a groundbreaking book by North Carolina-based anthropologist Harvard Ayers, PhD, and his colleagues harnesses the power of first-person storytelling to show the toll of climate change on the delicate ecology of the Arctic. It also bears witness to the strain felt by peoples caught between the allure of modern energy development and a traditional hunting- and whaling-based existence. “Most people who live in the urban areas of Canada can’t even begin to understand what life is like for these people,” said Bishop Mark MacDonald, national indigenous Anglican bishop and former bishop of Alaska as he introduced Dr. Ayers at a recent slide presentation at the office of the Anglican Church of Canada in Toronto.

Enter Arctic Gardens: Voices from an Abundant Land, a revealing book that took shape from interviews with more than 100 native and other residents in northern communities from the Mackenzie Delta to the Chukchi Sea. The stories told by the Gwich’in (People of the Caribou) Indians and Inupiat and Inuvialuit Inuit are far more powerful than the quibblings of geographers and climatologists. The authors also describe a region torn between the potential prosperity of developing the region’s fossil fuels and the real threats such development poses to the land and its peoples’ traditional livelihoods and languages.

At his slide presentation featuring native spokespersons in the context of the existential beauty of the Far North, Dr. Ayers said the book’s format was inspired by the late Chicago writer Studs Terkel-the original reality-show impresario-who gave the common man and woman a voice in print. “He believed real people could tell their stories better than he could. So this is the model we followed,” said Dr. Ayers. Here are two edited excerpts.

Darius Elias, a Gwich’in from Old Crow and a Member of the Yukon Legislative Assembly: “We see summer clouds in December, the fluffy clouds. It rains in December and causes havoc amongst the animal population. It doesn’t get to 50 or 60 below anymore. It’s to the point where it’s costing people their lives. When we go out in the bush, we don’t know if we are going to see an overflow or an open lake, so people are hesitant to go out.”

Glenna Tetlichi, a Gwich’in from Old Crow, Yukon: “There have been so many changes with the lifestyle and our diet and the climate. We used to have a very simple lifestyle. We lived mostly on what we harvested from the land and the water. There was not a lot of store-bought food. The community was a lot closer. I remember hearing the [old] language every day, all day. There was no concern about health issues because we lived and ate healthy. Elders lived to be very old. But today we lose a lot of people at a young age to diseases like cancer and diabetes.”