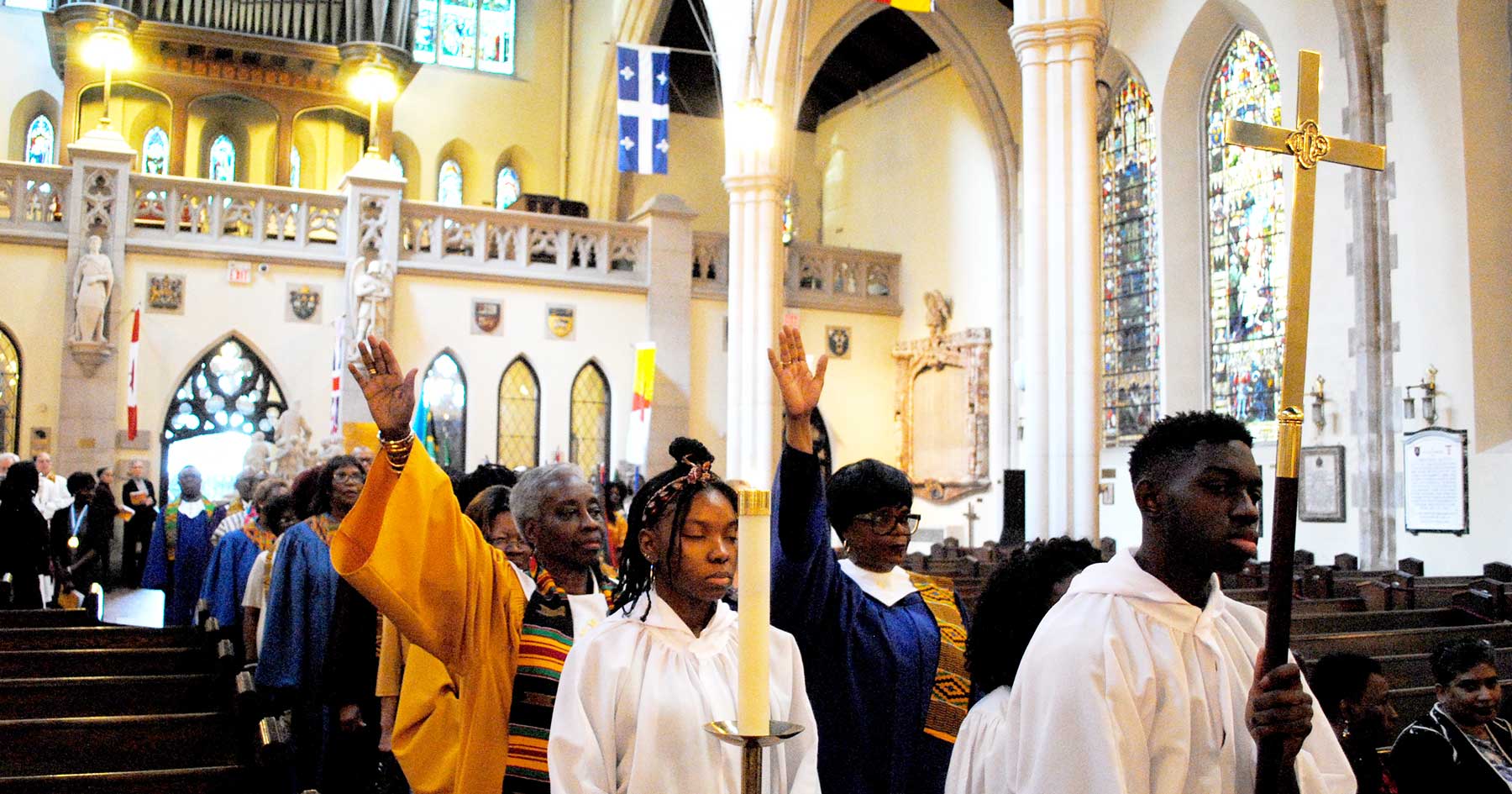 If you didn’t know the Anglican Church of Canada had a racial justice charter, you’re probably no different from many other members of the church, says Brother Reginald Crenshaw, a member of the Anglican religious community Order of the Holy Cross and part of the leadership team of Black Anglicans of Canada (Bl.A.C.).

In fact, the church has had a charter committing it to take action for racial justice since 2007—but not many Canadian Anglicans seem to know about it or to have acted on it, Crenshaw says. This, he says, has to change. It’s one of the reasons why Bl.A.C.—the establishment of which was discussed decades ago—has at last come into formal existence.

“Within our diocese [of Toronto], for one, the charter…is not well known,” Crenshaw says. “It’s been widely distributed, because it’s an official policy statement of the church, which means every diocese in this church has seen it or received it. But there has been no response to it.

“One of the reasons why our group has re-emerged is that there has been very little institutional life given to this document across the country, except probably with Indigenous peoples, because they’ve organized around these things as well.”

Within our diocese [of Toronto], for one, the charter…is not well known. It’s been widely distributed, because it’s an official policy statement of the church, which means every diocese in this church has seen it or received it. But there has been no response to it.

The origins of Bl.A.C. go back to 1994, when a group of Canadian Black Anglican clergy and laypeople began meeting to discuss the creation of a national association with local and diocesan chapters, much like the Union of Black Episcopalians in the U.S. For various reasons, Crenshaw says, an organization did not immediately result from these meetings, though they did bear fruit in one way: the tradition of an annual Black history service in the diocese of Toronto, the 25th anniversary of which was marked this February.

A turning point in Bl.A.C.’s creation came, as it turned out, with a service in 2017 in Toronto to raise funds for relief efforts in the wake of a hurricane that had swept through the eastern Caribbean. Galvanized by their success, the clergy and lay Black Anglicans who had organized this service met to talk about how they could work together for racial justice.

Eventually a group of 32 clergy and laity from the diocese recommended forming an organization to “create a strong Black voice within the Anglican church,” Crenshaw says. In July 2018, Bl.A.C. was formed.

A call to racial activism

A Charter for Racial Justice in the Anglican Church of Canada, drawn up by the church’s anti-racism working group, was received by Council of General Synod (CoGS) in 2004 and formally approved by General Synod in 2007. The document commits the church to fighting racism in various ways, and provides the theological rationale for doing so. It also includes a brief history of racism in Canadian society and in the Anglican Church of Canada.

Bl.A.C. hopes to give the charter life partly by encouraging thought and discussion around the issues it raises, Crenshaw says.

“When we talk about institutional racism and discrimination, there’s very little discussion in the church about these issues at all,” he says. “In fact, there’s a general silence on them—giving the impression that they are of minimum importance and don’t really exist in the church. So awareness and education are the key pieces here.”

But there’s more to the charter than raising awareness, Crenshaw notes. It also commits the church, he says, “to support and participate in the world-wide struggle for racial justice in church and society, as advocates and activists”—a statement he hasn’t seen in similar charters.

“It’s calling for direct action—not just intellectual discussion of an issue or even just acknowledgement of an issue—but being active in changing our society and changing our church structures.”

In an address to CoGS last November—her first as primate of the Anglican Church of Canada—Archbishop Linda Nicholls said she hoped the church would soon start working to deepen its commitment to the charter.

Nicholls said she believed systemic or institutional racism was at the heart of some of the challenges involving Canada’s Indigenous people, and that she’d seen discrimination against racialized people in the church.

“I’ve seen the pain amongst clergy of colour who are very clear when I ask them, ‘Have you been a victim of racism in our church?’ and every one of them nods,” she said.

Crenshaw agrees that many Black clergy, especially those who have immigrated from the Caribbean and Africa, have not been given a chance to fully participate in the life of the church.

“There are many ways in which they are ignored and not really included in representation on diocesan councils where they should be,” he says.

The exclusion of Blacks from full participation in the Anglican Church of Canada has historically taken subtler form than legally enforced segregation—but have been hurtful nonetheless, he says. For example, it was not uncommon for new Black arrivals at Anglican churches as late as the 1970s and ’80s to be told they’d be happier in the “Black” church down the street. Alternatively, a majority-Black congregation might be led by all-white leadership teams—though this is less common than it was a few decades ago, Crenshaw says.

Bl.A.C. wants to increase awareness in Canada of the issues many Black Anglicans are facing, and to spur the national church to action in living up to its racial justice charter. Crenshaw describes its specific goals as furthering the empowerment, inclusion, participation and representation of Black Anglicans in the church. These goals are to a great extent concerned with increasing the participation of Blacks in church leadership roles. But they also aim at cultural changes—allowing a fuller expression of Black Canadian culture in the church’s liturgy, for example.

Among the group’s current priorities, Crenshaw says, is to strengthen its base in Toronto and then to expand to other cities in the province, and then nationally. Another is to build relationships with other Black and otherwise racialized communities and groups beyond the Anglican church, to collaborate with them.

The leaders of Bl.A.C. were formally installed, by Peter Fenty, area bishop for York-Simcoe, at the diocese of Toronto’s Black history service this year. The service’s 25th jubilee ran three hours and featured speeches, prayers, song and traditional dancing and drumming.

In remarks to the congregation, Canon Donald Butler, priest at the Church of St. Andrew, Scarborough, Ont., said the 21st century continues to see a lack of confidence in Black leadership—even among Blacks themselves. For this reason, he said, it’s important that the Black community work together to develop confidence in its leaders.

“I believe that those who are affected the most by marginalization, victimization or other oppressive behaviours must be at the forefront of any action or struggle that would mitigate the causes that create harm in their lives,” Butler said. “Don’t get me wrong—we need allies, we need other people to stand and walk with us…but we must never, ever depend on other people to do for us what we should and can do for ourselves.”

As a newcomer to Canada 31 years ago, Butler said, he felt unwelcome—and he often still feels unwelcome here now, he added to applause from the congregation.

“That is not only my experience. If we do nothing, things will remain the same,” he said.

In a sermon, Canon Stephen Fields of Holy Trinity Thornhill, Ont. called on those sympathetic to the challenges faced by Black Anglicans to action. “The compassionate cannot sit on the sidelines and say, ‘I’m sorry’,” Fields said. “Compassion interrupts one’s personal journey and makes us all re-examine our values.” Fields also called on the church’s seminaries to include courses in anti-racism, to more applause. 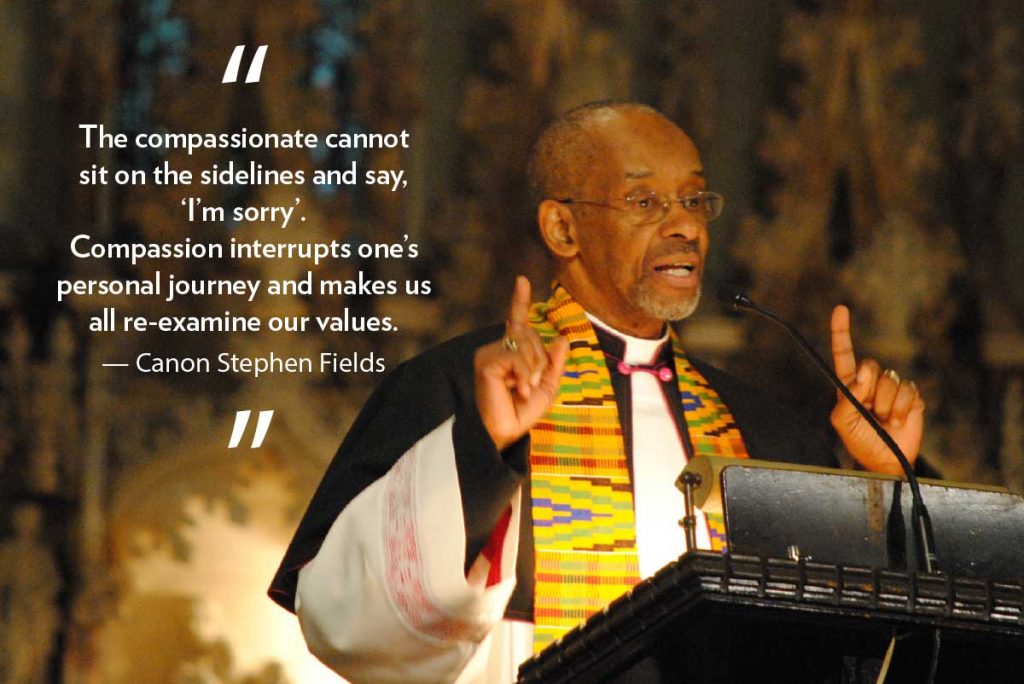 The issue of representation of racialized minorities in the church has come up more than once at CoGS. At its meeting last November, Canon (lay) Noreen Duncan, representative to CoGS of the U.S.-based Episcopal Church, praised the council for its reconciliation work but advised it to “look in the mirror.” Duncan said she perceived a lack of racialized people among the members of CoGS. She also said she believed the church should actively encourage these people to involve themselves in its leadership—partly because many of them represent areas of potential growth in the church.

“It’s not just a question of wondering when are the African, Asian and Caribbean members of the congregation going to volunteer,” she said. “You have to point them out. Bring them out for a tea…and ask them, ‘Please help us.’”

On March 21, 2020, as this article was being written, the Anglican Church of Canada, its full communion partner the Evangelical Lutheran Church in Canada and the United Church of Canada released a joint letter committing themselves to “recognize and celebrate” the International Decade for People of African Descent, proclaimed by the UN in 2013. The decade, spanning the years 2015-2024, has a number of goals, including protecting the human rights of people of African descent, promoting their heritage and fighting racial discrimination.

“Through this International Decade we hear a call for our churches to do more to address anti-Black racism in Canada and globally,” the letter states.

The three churches also say they have historically been allied with “colonial governments and oppressive structures” and have helped perpetuate “injustice and violence, both directly and indirectly, to people of African Descent,” including their enslavement.

The letter states that the churches celebrate people of African descent and are strengthening their commitment to “addressing the root causes and current manifestations of anti-Black racism within the church.”

To that end, it continues, the churches are planning to “gather and share resources that encourage conversations across our churches,” to foster understanding of human rights and help eliminate racism, hoping to work with their interfaith partners and others who share these goals.