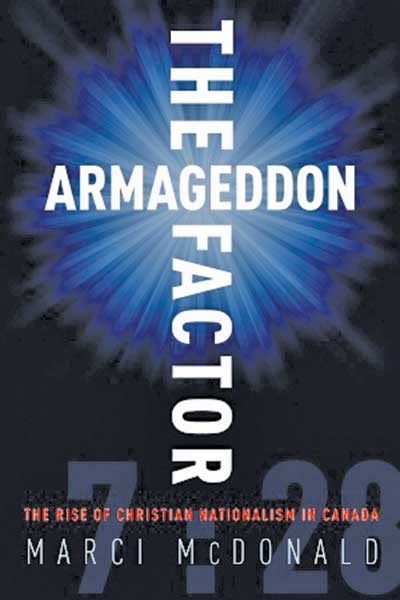 When Stephen Harper offered that benediction at the conclusion of his 2006 victory speech, it signalled a shift in the role Christian faith would play in government.

That supposed shift is what journalist Marci McDonald attempts to navigate in The Armageddon Factor: The Rise of Christian Nationalism in Canada. She considers the book a “wake-up call,” and says “the political process is being co-opted by an extremist vision of Christianity.”

McDonald suggests the effort to transform Canada into a Christian theocracy is quietly but systematically occurring on several fronts. It is guided and funded by socially conservative Christians of evangelical persuasion. She dubs them “theo-cons.”

For a long time disparate and unorganized, conservative-minded Christians in Canada found a single voice in the national debate over same-sex marriage. Their unified opposition galvanized them into a political force to be reckoned with, and one courted more and more by the federal Conservatives.

Inspired by successful examples in the U.S., efforts by so-called Christian nationalists to influence Canadian public policy have increased since Stephen Harper’s Tories took office, McDonald argues. Notably, a growing number of socially conservative Christian organizations have in recent years established a permanent presence in Ottawa. They include such groups as Focus on the Family Canada, the National House of Prayer, and Trinity Western University’s Laurentian Leadership Centre.

These efforts, McDonald says, are aimed at finding their fulfilment in what she calls the “Armageddon factor or the belief that Canada has some particularly significant role to play during the so-called ‘end times.’ ” For those who believe, fulfilling this destiny means transforming Canada into nothing less than a “Bible-based theocracy.”

By choosing to focus so tightly on a minority of evangelicals holding extreme views like creationism, Christian reconstructionism or Christian Zionism, McDonald creates an unhelpful caricature of evangelicalism that ignores this tradition’s subtleties and diversity of views.

It also obscures the fact that Christianity long ago “infiltrated” Parliament Hill, and that mixing faith and politics need not always result in some form of extremism. Tommy Douglas, Lester Pearson, John Diefenbaker, Pierre Trudeau and Elizabeth May all brought or bring an active Christian faith life to their public lives, albeit in an understated way.

Still, The Armageddon Factor represents a first attempt to analyze, understand and track the influence of the new brand of conservative Christian activism that, long a fixture on the American scene, is now establishing itself on the Canadian political landscape. Ω

Formerly a parliamentary correspondent in Ottawa and Quebec City, Bruce Myers is the archdeacon of Quebec.