I will be the first to admit that I have never really been a fan of large, herbaceous quadrupeds.

Growing up on a small hobby farm in southwestern Ontario, cows, goats, sheep, and horses were merely part of the landscape, and I never quite understood the excitement they would elicit from my more urban family members.

In fact, I resented it.

Every time my city cousins would come to visit, rather than wanting to race boats in the creek or play hide-and-seek in the forest, they would immediately rush to the horse paddock and spend what always seemed to be an inordinate share of their rare visits standing awestruck at the fenceline.

From the perspective of my eight-year-old self, equines stole my friends.

While a great deal of time has passed, my indifference to hooved animals, cloven or uncloven, has largely remained. So you can imagine my enthusiasm when, moving back to Quebec City, I found myself living with a donkey and a goat.

For the last several years, a parishioner at Holy Trinity Cathedral has kept a donkey and a goat within a walled garden inside the cathedral close. To be more specific, a walled garden that now serves as my family’s backyard.

The reports about these animals have not been exaggerated. Each day, a few hundred people amble toward the garden wall and, not unlike my childhood family and friends, stand awestruck at the stone fence line. They come from a variety of walks of life: tourists, professionals, school children and the city’s most marginalized.

Of course, they immediately won over my two-year-old, whose first words each morning, rather than the usual “Dada story?” are now some variation of “See donkey? See goat?”

An equine stole my daughter.

Yet, as I have come to understand, there is a significant set of differences between horses and donkeys, differences that I think we can learn from as a church.

While both horses and donkeys live in communities (herds), the community instinct of donkeys differs from horses. Wild horse communities tend to be larger and to stay fairly consistent over the years in terms of their membership. In contrast, wild donkey communities are smaller, more nimble, and their membership changes based on the context in which they find themselves. Donkey’s pair off, they welcome newcomers, fashion and refashion their small group according to the needs of their environment.

And this makes sense. Donkeys have evolved to thrive on the margins; they are the desert survivalists of equines.

Upon meeting a new and potentially threatening situation, donkeys do not spook—they investigate. Their brave curiosity and willful intelligence, undominated by a herd mentality, have given them a reputation for stubbornness. However, as my childhood sheep-farming neighbours knew well, this made them wonderful protectors of the weakest in the flock, as the donkeys would use these same traits to dutifully guard their sheep from predators.

But perhaps most of all, donkeys are humble creatures; they are an almost universal symbol of human communities that work close to the land, that live without pretension. As our liturgical calendar reminds us every year, emperor’s ride horses, but Jesus chose to walk his path, from birth to death, with a donkey.

These lessons were not lost on the cathedral community, which gathered recently to say goodbye to the donkey and the goat, who will soon be moving to a farm in the Eastern Townships. They thanked these non-human animals for their ministry, for the gifts of healing and hospitality they gave to the cathedral community and it neighbours. As Louisa Blair’s Daisy and the Donkey Church, a children’s story book based on their time in the close explains, “Jesus said we must love God, and we must love our neighbours as ourselves. [The donkey] and [the goat] are helping us do that.”

As I write this, I watch as a man without shoes, a man in tattered and unwashed clothing, a man clearly living on the margins, tiptoes up to the garden wall and begins to talk to the donkey. I have no idea what they are talking about, but it’s rather animated and it goes on for some time. The donkey just stands there without judgment and listens.

I wonder who will listen when the donkey is gone?

The church community will no longer have a donkey, but maybe in its absence we can become more of a donkey church. 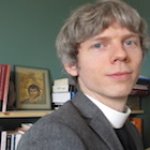 Jeffrey Metcalfe is the diocese of Quebec's canon theologian.