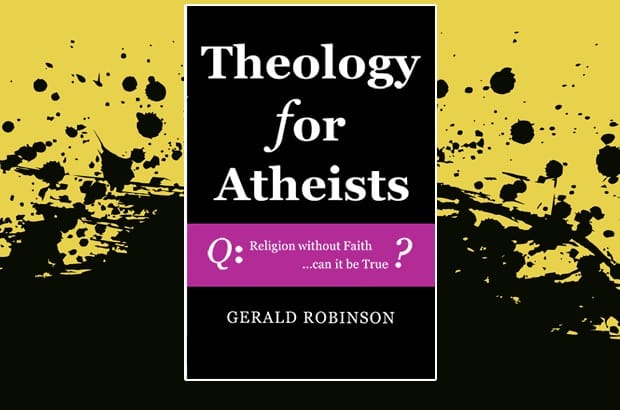 Award-winning Toronto architect Gerald Robinson is an adjunct professor of theology, in the divinity faculty at the University of Toronto’s Trinity College.

He’s a member of the Anglican congregation that worships in Trinity College Chapel and regularly attends services in the chapel. He calls it his parish church, his “go-to” place to worship. So what is he doing socializing with atheists in Scallywags, a Toronto pub?

Robinson is also an atheist who describes himself as an Anglican/Atheist/Christian-a description that must raise many eyebrows. Some will dismiss it as contradictory, incomprehensible.

No conflict or contradiction here, Robinson says. He explains why in Theology for Atheists, described by a reviewer as “the most fun serious work” she has ever read. He calls it an “outrageous book,” and it’s liable to outrage some people.

In his 168-page book, Robinson addresses such subjects as heavenly warfare, faith or reason, and miracles. He raises such questions as: Can atheists have a theology? Do atheists have souls? Can an atheist be a Christian if he or she denies the divinity of Jesus?

He answers with an emphatic “yes.”

Robinson says Jesus never claimed to be God, that nowhere in the gospels does he make that claim. Free Jesus from the doctrinal cluttering, and he is still the “greatest teacher the world has ever known,” whose message of peace, love and tolerance is sorely needed by a troubled world.

Much of Robinson’s book is devoted to an examination of the gulf between people of faith and non-believers. Atheism is an attitude, a form of mind that “looks at the world objectively, fearlessly, always trying to understand all things as part of nature.” With no supporting evidence, people of faith assert that their faith is the right faith, and their path is the one true path, providing them with a comfort zone in which they bask.

But surely, in a world of numerous religions and gods, it follows that that all others are wrong, resulting in bloody religious wars for supremacy.

Originally, most of the tenets of permanent truth were seen as a reasonable explanation of the cosmos and the human society within it, but with the advancement of science, “the logic of those continuing to adhere to absolute truth became more strained.”

While some people of faith may find it difficult to accept, Robinson says atheists can be spiritual beings. He promotes a common ground where non-believers can join in the celebrations of a religious community, to share their rituals and devotions without having to adopt their beliefs; a common ground where atheists can offer explanations for sacred mysteries, while revering them as myths.

Noting the significant increase in non-believers and the plummeting decrease in church membership, Robinson says it’s imperative for non-believers and faith communities-many of whom are engaged in social action and have concerns about human rights and environmental issues-to join forces. He says it’s time for a partnership in which we can all worship the beauty and wonder the world has to offer while helping to save the planet.

As an Anglican, he suggests that the Anglican/Episcopal Church makes the lowest demands for conformity of belief and could lead the way.