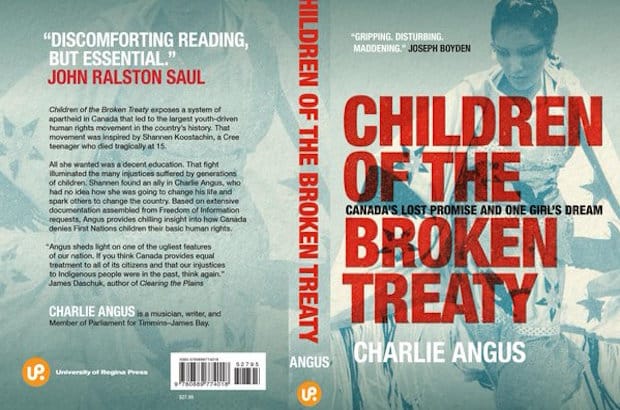 Today, 89 First Nations across Canada have drinking wateradvisories, 43 of them in Ontario. As with education, provision of clean watersuffers from a lack of jurisdictional coherence. The Ontario Clean Water Act of2000, a response to the deaths in Walkerton, Ont., does not cover reserves inthe province.

Daily we hear of child and youth suicide: 100 attempts inAttawapiskat (population 2,000) since September 2015—38 of those in March andApril of this year. Yet, Angus chooses to focus the book on the vision andcourage of Aboriginal youth who struggle for equity, fairness and respect.

In January 2008, a Students Helping Students campaign waslaunched to stand up to Canada’s “educational apartheid.” Attawapiskat’s needfor a school was dire.

Within a few weeks, national media picked up the story, and twonorthern Ontario schools joined the campaign, followed by schools in Toronto. AYouTube video (a new platform in 2008) made by David Fraser, an Indigenous Grade5 student, went viral with 35,000 hits. Teachers’ federations and school boardsacross Canada wrote letters to then Minister of Indian Affairs, Chuck Strahl.

From this momentum, emerged youth leaders: 13-year-oldShannen Koostachin, 12-year-old Chelsea Edwards, and others. Angus describesthe initially tentative, and then more confident, dialogue between the youngleaders and Strahl. The author’s relationships with the people in Timmins-JamesBay shine through the narrative, and the result is respectful and tender.

Children’s rights activist Cindy Blackstock observed a youthdelegation to Parliament Hill and said: “The Cree youth had internalized thebroken promises…This [moment] was the beginning of a profound social movement,not just for education rights, but for all manner of rights for First Nationschildren.”

Tragically, Shannen was killed in a car accident May 31,2010, while attending Grade 9 in New Liskeard. A milestone motion, “Shannen’sDream,” passed in the House of Commons Feb. 27, 2012.

What will it take for lasting change to happen? Children of the Broken Treaty suggests amix of leadership by First Peoples, including youth, along with publicawareness and solidarity, and political pressure for systemic change at alllevels—local, provincial, federal and global—through the United Nations. Add implementationof the Truth and Reconciliation Commission’s Calls to Action and, by God’sgrace, the cycles of oppression may begin to break.