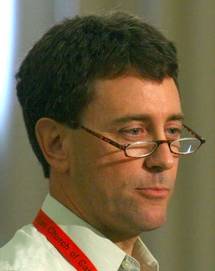 The diocese of Algoma on Oct. 2 elected Rev. Stephen Andrews, who is General Synod prolocutor, as its new bishop.

Bishop-elect Andrews, who is president and vice-chancellor of Thorneloe University in Sudbury, Ont., was elected on the ninth ballot, according to a brief announcement at the diocesan Web site, www.dioceseofalgoma.com

A respected New Testament scholar, Bishop-elect Andrews is a member of the Primate’s Theological Commission that published the St. Michael Report, a 2005 Canadian theological paper which concluded that the blessing of same-sex unions is a matter of doctrine, but not core doctrine. (The Commission, which is composed of bishops, priests and theologians, encourages and promotes theological discussion in the church.)

He was also a member of the team that presented the Canadian church’s view on same-sex blessings to the international Anglican Consultative Council in 2005.

In 2007, he was elected by delegates to the Anglican Church of Canada’s General Synod as prolocutor, or chief deputy to the primate and second executive officer.

A former rector of St. Alban’s Cathedral in Prince Albert, Sask., and dean of the diocese of Saskatchewan, he joined Thorneloe, an Anglican federated college of Laurentian University, in 2001.

Ordained a priest in 1987, he also served as assistant curate at St. Paul’s Anglican Church in Halifax.

As the 10th bishop of Algoma, Bishop-elect Andrews will lead a diocese with a wide mix of parishes in an area that is known as Ontario’s cottage country.

Bishop-elect Andrews and his wife, Fawna, have two daughters, Clare, and Ellen.

His hobbies include music, woodworking, gardening and birdwatching.