A journey through erased history: Kent Monkman’s Shame and Prejudice

You move through Kent Monkman’s art exhibit Shame and Prejudice: A Story of Resilience encountering found objects from Canadian museums, large canvases in the grand manner of European and American history paintings, and three-dimensional installations that tell the story of Canada from the all but erased Indigenous perspective. A mix of original works and curated objects in nine “chapters,” this show is told through the Cree artist’s time-travelling, shape-shifting, gender-fluid alter ego who writes, in the booklet Excerpts from the Memoirs of Miss Chief Eagle Testickle: “They wanted to take the Indian out of us; they couldn’t do that, but they did beat down our spirits.” Early on you encounter an 1879 quote from Canada’s first prime minister, John A. Macdonald: “When the school is on the reserve, the child lives with its parents who are savages, and though he may aspire to read and write … he is simply a savage who can read and write.”

There is nothing subtle about Monkman’s exhibit, which is now completing a national tour with an extended stay at the Museum of Anthropology at the University of British Columbia. Starting with images of the European slaughter of the beaver and the buffalo, to the end it functions like a bracing shower startling you into a deeper awareness of the tragic effects of colonization on the first peoples who have inhabited these lands from time immemorial. To say it grabs you by the gut would be an understatement.

“I never set out as an artist to be an educator,” Monkman said recently in a discussion posted on YouTube, “but I was shocked at how many people did not know the story of the Indigenous reality in Canada.” He writes, “My mission is to authorize Indigenous experience in the canon of art history that has heretofore erased us from view…. Museums across the continent hold in their collections countless paintings that depict and celebrate the European settlers’ expansion and ‘discovery’ of the North American landscape, but very few, if any … show the dispossession and removal of the First Peoples from their lands.”

Guiding us through this exploration of dispossession and removal is Miss Chief. Monkman explains: “Using humour, parody and camp, I’ve confronted the devastation of colonialism while celebrating the plural sexualities present in pre-contact Indigenous North America. A gender-bending time-traveller, Miss Chief lives in the past, present and future. She embodies the flawed and playful trickster spirit, teasing out the truths behind false histories and cruel experiences.”

Juxtaposing his installations against historic artifacts and classical paintings, Monkman offers a powerful counterpoint to history as taught and learned by generations of settler Canadians. In one of his most celebrated works, “The Daddies,”—painted on a large canvas reminiscent of 19th century portraits—the Fathers of Confederation are depicted in a fetishizing gaze upon a naked Miss Chief Eagle.

From encountering this painting, you move into a space dedicated to the residential schools. You first see an installation of artifacts: beautifully decorated cradle boards used by Indigenous parents to carry infants.  These are interspersed with neutral grey mock-ups suggesting more, and ghostly chalk casket-like outlines of even more. The installation powerfully evokes the disappearance of Indigenous children. The space is dominated by a large canvas, “The Scream”—you see mounties, priests and nuns forcibly taking children away from their mothers to attend residential schools. While most of the paintings and installations have extensive commentary from the artist, at this “chapter” Monkman simply writes, “This is the one I cannot talk about. The pain is too deep. We were never the same.”

While Monkman cannot talk about it, I must. And I think we Anglicans must.

The residential schools functioned for more than 100 years (1870-1990), and 150,000 Indigenous children attended. Once you realize this, you cannot shrug them off with a glib “that was a sad period of our history.” More, much more is demanded. “The Scream” provoked a visceral response from me because there it was, in vibrant colour: mothers’ faces filled with horror and grief as their children were forcibly taken from them. And there was the church in cahoots with RCMP officers violently taking young children away from their families and communities. I know only too well what followed: crowded dormitories where infection raged, classrooms where children were forbidden to speak their languages, corporal punishment to keep discipline, and physical and sexual abuse for so many. “The Scream” brings the horror into focus, the empty cradleboards a sickening reminder of lost lives. The residential schools were a deep betrayal of a trust so generously given by Indigenous people to colonial missionaries. I grew up in a church that masked the horror of the schools beneath a veneer of paternalism. As more and more was disclosed by survivors, I began to feel the weight of what had been inflicted. Seeing “The Scream” brought it all into focus. I wept.

At “Incarceration” you encounter an installation of a prison cell with one inmate in it. You read from the 2013 Government of Canada document Aboriginal Offenders that includes statistics on Indigenous incarceration: “46.4% of the Prairie Region inmate population…. At Stony Mountain Institution in Manitoba, 389 out of 596 inmates—65.3%…. At Saskatchewan Penitentiary, 63.9%.… At the Regional Psychiatric Centre in Saskatoon, 55.7%.… and at Edmonton Institution for Women, 56%.”

While clearly identifying the church as an agent of colonial assimilation, Monkman’s works transpose cherished Christian images placing Indigenous people at the forefront. Most moving for me was a mixed media installation simply called Nativity Scene (2017). Here we find an Indigenous Mary, Joseph and infant Jesus, in a small hut-like setting. Joseph is wearing a Chicago Black Hawks hockey shirt; Mary is attired in parka and sweatpants; and the infant Jesus is lying on a Hudson’s Bay Company blanket. It is  a moving depiction of the nativity, and it raised for me the challenging question of how settler Christians understand the Incarnation through the lived history of Indigenous people. Is the artist inviting non-Indigenous to see, in this hut, a challenge to our assumptions and an invitation to consider deeply the obligations that descendants of colonizers have to the first peoples of this land whose lives were so violently disrupted?

For just as Jesus was most likely born on the margins of a society dominated by the Roman Empire, and grew up to challenge the assumptions of that empire in his teaching, are his followers called similarly to challenge the assumptions of colonizing empires? We are way beyond the Huron Carol here. Nativity Scene took me not to a romanticized birth but to a revolutionary Saviour whose preaching and teaching led him to be killed by ruling authorities because he challenged the powers of Empire.

Journeying through this show was disorienting for me. Seeing the history of Canada that I was taught upended with accounts of how Indigenous ways of life were destroyed made me question assumptions implicit in education and religion. Survivors were moved onto reserves. The deliberate erasure of Indigenous peoples’ stories and cultures was designed to replace their values with “Christian” teachings imposed by colonizers. The Church of England in Canada—as our church was known until 1955—was one of many agents of that colonization and the journey away from that history towards reconciliation between church and Indigenous people has only just begun in earnest. It will take generations to repent of the wrong that we have done.

Disorientation is, I believe, an uncomfortable but necessary prelude to this journey of reconciliation. There is more repentance to be offered as we non-Indigenous people become more and more aware of the deep violence of assimilation and its cultural genocide.

Monkman’s stated theme for the exhibit, created for the “Canada 150” project for the Art Museum at the University of Toronto, is resilience. He writes, “My goal is to counter the one-sided version of art history that exalts European ‘discovery’ of this continent and to celebrate and commemorate the indomitable spirit of Indigenous people.… I hope my paintings will function as a critique of colonization, authorize Indigenous experience in art history, and excite people with the enduing power and possibility of history painting, perhaps even reaching across the next hundred and fifty years.”

Enduring power and possibility: as the Anglican Church of Canada continues in its journey of reconciliation, art shows like Shame and Prejudice are important for helping us acknowledge our deeply embedded prejudice, re-vision our history and deepen our resolve to find a new and authentic partnership with those whose history has been erased, and whose future is the hope of a renewed church. 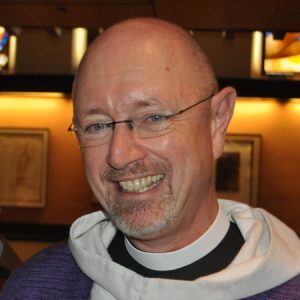 The Very Rev. Peter Elliott is adjunct faculty at Vancouver School of Theology. From 1994 to 2019 he served as dean of Christ Church Cathedral, Vancouver.