A ‘difficult year’ and ‘a different normal’

Though many people might not like to hear it, there’s no indication this year will be much better than 2020 in terms of the pandemic and its effects, say two Canadian Anglicans whose professional lives have connected them with the fight against COVID-19.

“I think 2021 is going to be a difficult year,” says the Rev. Michael Garner, associate incumbent of St. Thomas the Apostle Anglican Church in Ottawa. Before coming to the priesthood, Garner worked for 14 years as an infectious disease epidemiologist at the Public Health Agency of Canada. He currently serves as public health advisor to Shane Parker, bishop of the diocese of Ottawa, and advises Archbishop Anne Germond, metropolitan of the ecclesiastical province of Ontario, on pandemic preparedness.

“I know there are people who are fatigued and just want this to be over with,” he says. “I think we’re going to be a lot more tired. And how we care for ourselves and our congregations, and people in our broader circles, to help them continue to endure through this time is really important.”

This year, Garner says, will likely look and feel a lot like the second half of 2020, with restrictions meant to curb the spread of the virus likely to remain in place for some time—including those on in-person worship.

“I hope we’re doing in-person services next Christmas Eve, but I don’t know that there’s any guarantee of that,” he says.

Vaccine developer Marianne Stanford, too, says many Canadians may not find this year as easy as they had hoped.

“I anticipate there’ll be a lot of frustration, because I think people just want it to be over, and they’re trying to manifest what they want—and there’s a certain amount of patience that we all need to have,” she says.

Stanford, a professor at Dalhousie University’s department of microbiology and immunology, is also vice-president for research and development at IMV Inc., a Dartmouth, N.S.-based company developing a COVID-19 vaccine. She is a member of the Anglican Parish of French Village, on Nova Scotia’s south shore—a precious support, she says, in an extremely busy and intense time.

“Worshiping with them has actually probably kept me sane,” Stanford says.

The development of COVID-19 vaccines and the launch of vaccination programs in many countries around the world, including Canada, have given hope to many people that the end of the pandemic may be in sight. But Garner and Stanford caution that distributing the vaccines to all the people who need them—“the biggest health intervention in the history of the world,” Garner says—will be extremely complex and difficult.

“Making a vaccine in nine months is a monumental mountain,” says Stanford, “but vaccinating the majority of adults in the world is equally monumental.”

To reach herd immunity—the point at which so many people are immune to a disease that it does not spread through a community—it’s estimated that 80 to 90% of the population will need to be vaccinated, Garner says. But this will be difficult for several reasons. It’s possible, he says, that something like 20% of the population may feel hesitant about getting vaccinated, with a similar proportion strongly opposed; on top of that are the people who would like to be vaccinated but can’t because their immune systems are weak, because they’re receiving cancer treatment or for some other reason. Then there are also many people who are both willing and able to be vaccinated, but for whom scheduling the required two doses poses a real challenge—people in remote communities, for example, or single parents struggling to cope with the demands of working and parenting.

Some of these people for whom vaccination is difficult are also the most vulnerable to the pandemic, Garner says— the immunocompromised, for example, and lower-income people who may occupy front-line roles in service jobs or who live in apartment buildings, where the virus can spread easier than from house to house.

“I think there are going to be vulnerable groups for quite some time,” Garner says.

Vaccines developed by Pfizer and Moderna, which are being distributed in Canada, both require two doses to be fully effective. This, say Garner and Stanford, could result in a dangerous complacency if people feel unduly reassured by the first dose.

“It could be that people, after a single dose, assume they’re protected and then they stop doing the things they’re supposed to do—wash their hands, physical distance,” Stanford says. “That way, they could actually drive transmission, because their behaviour changes.”

The necessity of giving the vaccines in two doses also makes it difficult for health‑care authorities to decide how many doses to hold in reserve for that second shot, given that the supply of vaccines can be unpredictable. And there are unknowns around the vaccines themselves: how long they continue to be effective, and whether being vaccinated will prevent people from spreading the virus, as opposed to merely keeping them from getting sick. The necessity of keeping the vaccines extremely cold for every step in the distribution process is also a considerable challenge, Stanford says.

To some extent, generalizing about what the rest of 2021 is likely to feel like in Canada is difficult, Stanford says, because outcomes will probably continue to be different in different parts of the country. And of course, the possibility of new variants of the virus continuing to evolve also makes prediction more difficult.

Whatever happens, Garner says, the coronavirus is not about to go away any time soon, if the success of previous attempts to eliminate diseases like smallpox and polio are any indication.

“The thought that we are going to be able to get rid of this in a year is—I hope we can, but I think it’s naïve given human history,” Garner says.

It took until 1980 for the World Health Organization to declare smallpox eradicated, and polio continues to afflict people in many parts of the world despite the development of vaccines in the 1950s.

Unlike the epidemic of SARS, which ended in 2003, this virus’s high degree of contagiousness even when there are no symptoms means a quick eradication is not in the cards, Stanford says.

“That’s not happening with this one, I can tell you that,” she says. “It’s hard to imagine that a vaccine in itself will just snuff it out…. So I think it will just be with us,” she says, and be kept at relatively low levels, possibly, with yearly vaccinations.

Concerningly, she says, even once the coronavirus is brought under control, there will still be many people suffering with the long-term effects of COVID-19—brain fog, body aches and debilitating symptoms.

“That doesn’t get as much acknowledgement because often people very much focus on the mortality rate,” she says.

Online services for people who aren’t comfortable attending in person are likely one of a number of adaptations the church will have to make in coming years.

“I think it’ll be a different ‘normal,’” she says.

“The positive note is, we are going to emerge—as the world and, specifically, as Canada—on the other side of this at some point,” he says.

“[But] I do think the way we gather and interact is going to have to change, and probably the perception of risk is going to be differential across groups. So in thinking of the church service … how do we make space for people who are like, ‘You know what, I feel worried to do this’?

“How do we make space for a variety of expressions? I do think worship will likely change, as it should—as it has over 2,000 years.”

It also seems likely, he says, that new needs for the church’s ministry will come to light in the aftermath of the pandemic.

“My hope is that people are thinking and beginning to plan [and] think about how we can get resources to do some of that work as it emerges, and that we’re quickly able to mobilize.”

Garner adds he hopes that the pandemic, with all its suffering, might at least end up giving people a sense of what they can achieve if they work together towards a common goal—and just maybe inspire them to work together on other urgent issues, such as reconciliation or climate change.

“This [virus] takes a society-wide effort to get rid of, and the best-case scenario is, society and people realize that even though we don’t feel like we have power, we have power to make this thing go away,” he says. “Some of my optimism is that people recognize their own power to make change and impact the trajectory of some of these other crises.” 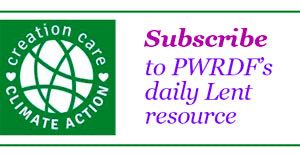